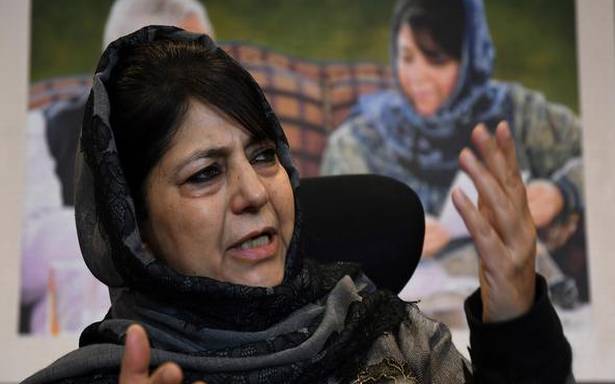 Jammu and Kashmir Police’s CID department has not cleared her passport application under section 6 (2) (c) of the Passports Act, the Regional Passport Office informed her

According to a letter sent to Ms. Nazir, who is the mother of former Jammu and Kashmir Chief Minister Mehbooba Mufti, the Regional Passport Office informed her that the Jammu and Kashmir Police’s CID department has not cleared her passport application under section 6 (2) (c) of the Passports Act.

Under this section, a passport is rejected by authorities if they feel that the applicant may engage outside India in activities prejudicial to the sovereignty and integrity of India or the departure of the applicant from India may, or is likely to, be detrimental to the security of the country.

A passport can also be rejected, under the section, if the presence of the applicant outside India may, or is likely to, prejudice the friendly relations of India with any foreign country.

This section can also reject an application if the Central government is of the opinion that issuing a passport or a travel document to the applicant will not be in public interest.

There are other reasons in this section which bars processing any application where an applicant has been convicted or is facing criminal proceedings or has a pending summon, according to the Act. But this is not attracted in the case of Ms. Nazir, whose husband Mohammed Sayeed had served as Union Home Minister in the 1990s and later as Chief Minister twice of the erstwhile State of Jammu and Kashmir.

“…your application for issuance of passport is refused,” said the letter issued by the Passport Officer to Ms. Nazir.

Ms. Mufti tweeted that the passport office has rejected her mother’s passport application.

“CID [Criminal Investigation Department] claims that my mother who is well into her seventies is a ‘threat to national security’ and therefore doesn’t deserve a passport. GoI [Government of India] is employing absurd methods to harass and punish me for not toeing their line,” she said.

Ms. Mufit’s passport has also been rejected under the same clause and her petition in the Jammu and Kashmir High Court was also dismissed.

Dismissing the petition, Justice Ali Mohammad Magray had observed that Ms. Mufti’s application for a passport was rejected by the passport officer, Srinagar, as the police verification report recommended against the issuance of the document to her.

“In such circumstances, I am of the considered view that no direction can be issued by this court for issuance of passport in favour of the petitioner,” the judge said in his order “Even otherwise, the scope of this court in the matter of grant or otherwise of passport in favour of an individual is very limited in as much as the court, in this behalf, can only direct the concerned authorities to expeditiously consider the case of an individual in the light of the mandate of the scheme of law governing the subject,” the order read.

In a letter to Ms. Mufti, the Regional Passport Office here had informed the People’s Democratic Party (PDP) president on March 26 that her application for a passport was rejected on the basis of the “adverse” police verification report.

The Passport Officer also informed the former Jammu and Kashmir Chief Minister that the CID of the Union Territory had recommended against granting a passport to her.

The letter said Ms. Mufti can appeal against the decision at a higher forum provided by the Ministry of External Affairs (MEA).

Commenting on the rejection of her application, the PDP president had said it shows the level of normalcy achieved in Kashmir.

“The Passport Office refused to issue my passport based on CID’s report citing it as ‘detrimental’ to the security of India. This is the level of normalcy achieved in Kashmir since Aug 2019 that an ex-chief minister holding a passport is a threat to the sovereignty of a mighty nation,” she had tweeted.