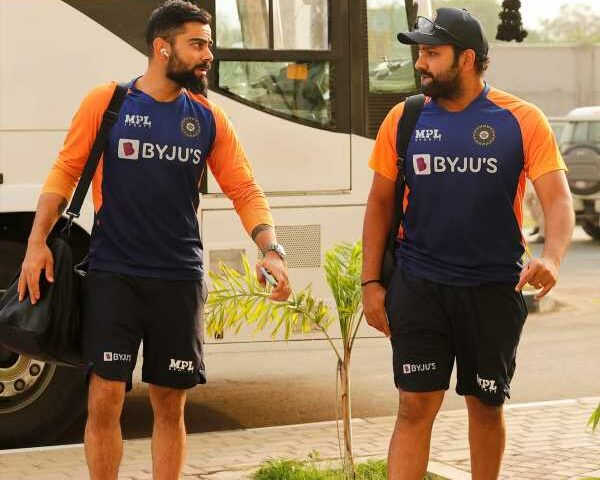 Rumours about the strained relationship between Virat Kohli and Rohit Sharma have swirled around for a while. But the England series seems to have produced a rapprochment between two of India’s best batsmen if indeed they were on such unfriendly terms.

According to a report in The Times of India, Chikoo and Ro sat across the table to apparently discuss what irked them about each other. The meeting took place at Ravi Shastri’s insistence. The head coach was determined that Kohli and Sharma ended their differences once and for all.

The bio-bubble may have stressed the players, but it strengthened their bond and allowed intra-team relationships to gloriously blossom.

‘Apart from winning two big series, that’s been the biggest gain inside the Team India dressing room. A great deal of personal bonding has happened in recent weeks and they are more in sync now than ever with regards to their cricket, the team, their responsibilities and the upcoming challenges,’ a source was quoted as saying in the ToI.

‘They understand now, more than ever, that the team will only benefit if they find themselves on the same page. This has been the biggest takeaway in the last four months,’ the source added.

‘All the chatter from the outside was causing too much bitterness and all the hearsay was making things worse. It’s been the story of Indian cricket for far too long — of vested interests time and again taking advantage of rivalries between players,’ the sources added.

‘Like all professionals, Virat and Rohit too would have their disagreements from time to time. But until recently, they never thought of sitting down and talking it out with the kind of clarity that is now visible,’ the sources revealed to the ToI.

Chikoo and Ro reportedly decided to spend a lot of time with each other, be it through tactical discussions or team pictures.

‘They’ve spent a lot of time talking to each other in public, like during the post-match presentation at the end of the T20 series. They’ve been appearing in photographs together a lot more than in the past,’ the sources added.

‘During the ODI series, Virat made it a point to keep his discussions on with Rohit (the team’s vice-captain) constantly during the game,’ the sources pointed out.

‘These things would happen earlier too, but this one time they’ve decided to make it more visible for outsiders to know that all this chatter now needs to stop.’