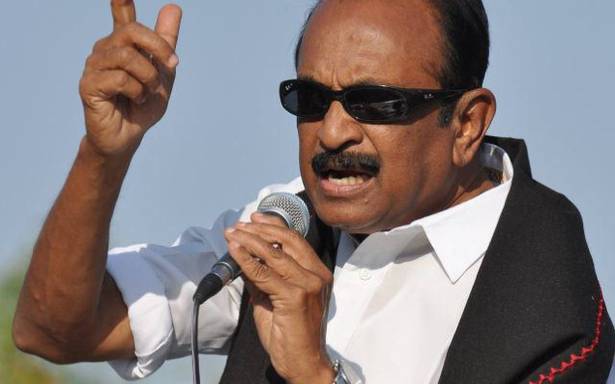 Marumalarchi Dravida Munnetra Kazhagam (MDMK) would continue in the DMK-led alliance and face the Assembly election as a constituent to stop the onslaught of Hindutva, party leader Vaiko told its cadres at a meeting held in Coimbatore on February 15.

“The party [MDMK] faced the 2019 Parliamentary election as a part of the DMK-led alliance. It will continue to do so to halt the Hindutva onslaught. Joining hands with the DMK was also based on ideology as it wanted to protect the Dravidian ideology.”

The MDMK was a pioneer in championing environmental causes and was unlike parties that recently set up environment wings, Mr. Vaiko said and claimed that the party was leading the struggle against methane and hydrocarbon extraction and Sterlite protest.

The party had always fought for protecting Tamil interest, and the mobilisation of donation worth ₹80.88 lakh in Coimbatore and Tirppur districts was a reflection of it. The MDMK, Mr. Vaiko said, was perhaps the only one that was still dependent on donations from the public to run its affairs. Not even the communists depended on donations anymore, he said, adding that several parties sat on piles of cash which they splurged during elections.