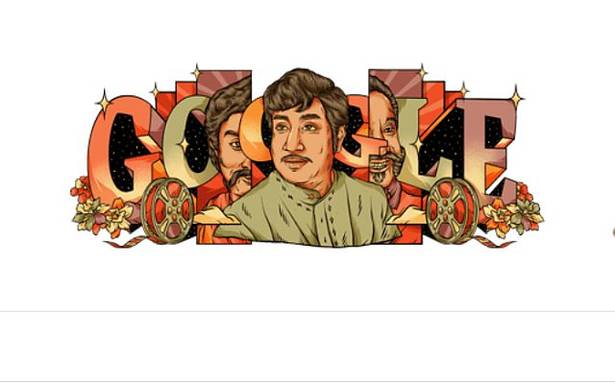 Today’s Google Doodle, illustrated by Bangalore-based guest artist Noopur Rajesh Choksi, celebrated the 93rd birthday of Sivaji Ganesan, one of India’s first method actors and widely considered to be among the nation’s most influential actors of all time.

Today’s (October 1 2021) Google Doodle, illustrated by Bangalore-based guest artist Noopur Rajesh Choksi, celebrated the 93rd birthday of Sivaji Ganesan, one of India’s first method actors and widely considered to be among the nation’s most influential actors of all time.

Villupuram Chinniah Ganesan, aka V.C. Ganesan, was born on October 1, 1928, in Villupuram, in the then South Arcot district of Tamil Nadu, to Chinnaiah, a railway employee and freedom fighter, and Rajamani.

At a young age of 7, he left home and joined a theater group, where he started playing child and female roles, then lead roles. The first landmark in his career was his portrayal of the Maratha warrior Sivaji in the drama Sivaji Kanda Samrajyam written by Dravida Munnetra Kazhagam founder C.N. Annadurai, who went on to become the Tamil Nadu Chief Minister in 1967. The name Sivaji became iconic and Ganesan carried the crown throughout his extraordinary film career.

The big break in Sivaji’s career came in 1952, when he acted as the hero in Parasakthi, a film directed by Krishnan-Panju and written by DMK leader M. Karunanidhi.

Sivaji had an extraordinary flair for dialogue delivery. He pioneered an exquisite style, diction, tone and tenor.

Playing a wide range of characters, from God and King to commoner, there was not a role that the thespian didn’t play on screen.

Critics list several films as his best in terms of performance. However, according to the actor, his career best was Kappalottiya Thamizhan, which tells the life of a freedom fighter, V.O. Chidambaram.

Sivaji Ganesan as VOC in the film Kappalottiya Thamizhan.

Whether it was the historical Great Chola emperor in Raja Raja Cholan, Lord Shiva (in Thiruvilaiyaadal) Saivite saint Appar (Thiruvarutchelvar), Vaishnavite saint Periyaalvar (Thirumal Perumai) or Tamil poet in Ambigapathy, Sivaji was always at his scintillating best. He was equally splendid in contemporary roles and stereotypes making every performance a memorable one. While many would see him as actor known for theatrics performance, his natural play could be seen in classic films like Thillana Moganambal, Kai Kodutha Dheivam, Ooty Varai Uravu and more.

Later, he adopted to the newage directors’ films. His role in the middle-age romantic drama In Bharatiraaja’s Muthal Mariyadhai in 1985 won allround appreciation.

It was considered a great injustice that the legendary actor hailed as ‘Nadigar Thilagam’ never won a national award for best actor. It was his cameo role in the Kamal Haasan-starrer Thevar Magan, released in 1992, won him the National Awards Jury’s Special Jury award in 1993. (Sivaji, incidentally, declined the award.) In 1995, France awarded him its highest decoration, Chevalier of the National Order of the Legion of Honour. At the fag end of his career the Indian government in 1997 honoured him with the Dadasaheb Phalke Award which is India’s highest award in the field of cinema.

‘Deiva Magan’ was the first Tamil film to be selected for the Oscars | Photo Credit: E.Gnanam

Bungalow No. 17 at Chevaliar Sivaji Ganesan Road, where the star resided in the heart of T. Nagar, Chennai, was christened ‘Annai Illam’. The property, where his family continues to reside, was bought seven years after his debut in Parasakthi.\\

Unlike his one-time associate and main competitor M.G. Ramachandran, who later became Chief Minister, Sivaji Ganesan did not appear to have had any significant influence over the people at the mass level. He served as a member of the Rajya Sabha. But despite his vast popularity as a film actor he was not successful in politics. Starting out as a Dravida Kazhagam and later DMK activist, he crossed over to the Congress in the late 1950s. When the Congress split in 1969 he stayed with the ‘old’ Congress of Kamaraj. After Kamaraj’s death he joined the Congress led by Indira Gandhi. In 1989, he formed his own Tamizhaga Munnetra Munnani and struck out alone only to suffer a humiliating defeat in the elections. Later he functioned as leader of the Tamil Nadu Janata Dal for a while, but soon ceased to be active in politics.

The great actor’s films have had an impact on the general psyche of the people and he was perhaps the first film personality in Tamil Nadu to be loved and respected in such large measure merely for his excellence in acting.

When asked about message that she hopes people take away from her Doodle, Noopur Rajesh Choksi said: "Sivaji Ganesan’s infectious vibrant energy and all the joy, passion, and pride that he took in his work when they see the Doodle. He continues to inspire and live through his work so I hope it encourages more people to chase their dreams and express themselves creatively, freely, and with conviction,".

"Appreciate the people from Google India & their guest artist Noopur Rajesh Choksi for the doodle art. Another proud moment!\uD83D\uDE0D Love him and miss him more every year!," Sivaji’s grandson and actor Vikram Prabhu tweeted.