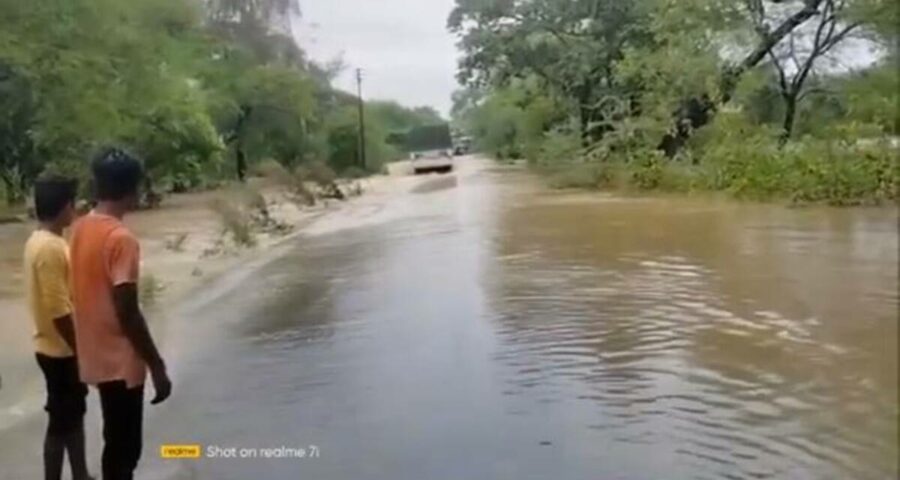 In a viral video, one of the rescued passengers is heard telling the authorities that the driver and conductor were stuck inside in the bus Four persons are missing after a state transport bus was swept away Tuesday morning by strong currents from an overflowing nullah about 3 km from Umarkhed town in Maharashtra’s Yavatmal district.

Two of the six occupants in the bus have been rescued. In a viral video, one of the passengers is heard telling the authorities that the driver and conductor were stuck inside.

“The incident happened around 8 am. The MSRTC bus had six persons aboard, including the staff. While crossing Dahgaon Nala between Pusad and Umarkhed, the bus was swept away due to the force of the water. Two persons have been rescued while we are looking for four others,” said a senior MSRTC official.

Maharashtra State Road Transport Corporation (MSRTC) Managing Director Shekhar Channe said the bus was plying on the Nanded-Nagpur route when the driver decided to proceed ahead on a bridge submerged in water.

Onlookers had captured videos of the bus getting swept away while crossing the flooded bridge over the nullah that was in spate due to the heavy rains. After the videos went viral, officials from the Umarkhed administration rushed to the spot and rescued the passengers, sources said.

Most districts in Marathwada and Vidarbha have been receiving heavy rainfall over the last few days which has caused rivers and streams to overflow, besides affecting normal life and leading to heavy crop losses.