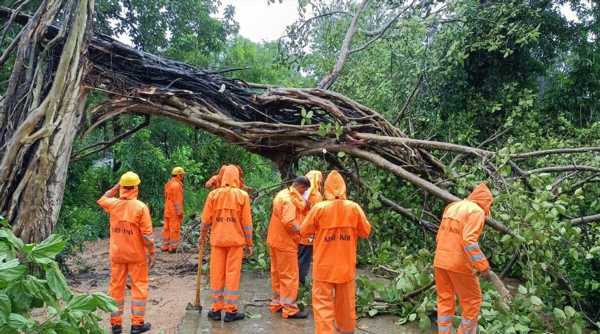 Cyclone Gulab has left a trail of devastation in its wake in Maharashtra, with dozens of lives lost and crop damage across an estimated 17 lakh hectares of agricultural land, mainly in Marathwada and Vidarbha regions. Heavy rain caused by the cyclone have been lashing the fields since the last two days.

State Agriculture Commissioner Dheeraj Kumar said the extremely heavy rain could end up damaging 23-25 lakh hectares of agricultural land. Work of conducting the panchnama to assess the extent of damage is going on at war footing, he said.

The cyclone has caused heavy to very heavy rain in the districts of Nanded, Beed, Latur, Parbhani, Osmanabad, Aurangabad, Jalna , Hingoli, Akola and Washim. According to initial estimates by the state Agriculture Department, crop loss across at least 17 lakh hectares of area is being estimated.

“Our office has received intimation of crop damage under the Pradhan Mantri Fasal Bima Yojana (PMFBY) from 19 lakh farmers. It is estimated that this can later increase to 22-23 lakh farmers while the crop damage can be as extensive as across 25 lakh hectares of farm land,” said Kumar.

Since the beginning of monsoon in June, Maharashtra has received 1193.1 mm of rainfall as against the normal 998.2 mm it was supposed to receive.

The divisions of Konkan, Aurangabad and Amravati have especially received excess rainfall. Considering that the monsoon had started on a weak wicket in June, the present excess rain is a stark contrast to the monsoon deficit parts of the state had reported in the initial days of the season.

But the current spell of heavy rain comes at a time when farmers are getting ready to harvest their crops, including soyabean, cotton, pulses and vegetables, which have reported damage.

Yuvra Patil, a farmer from the village of Shelgaon in Ardhrapur taluka of Nanded, said the present spell of rainfall has damaged harvest-ready crop. “Most farmers had shifted to an early variety of oilseed and they will suffer the maximum loss,” he said.

This is the second time in one month that many farmers in the state have reported crop damage. Earlier, districts had declared mid-season adversity due to heavy rain early in September. Over 40 lakh hectares of crop was affected, and Marathwada and Vidarbha were the worst hit regions.

The agriculture commissioner said the state government has released its share for the PMFBY and the central government is expected to do the same. “We hope this will prompt insurance companies to pay compensation to farmers soon,” said Kumar.