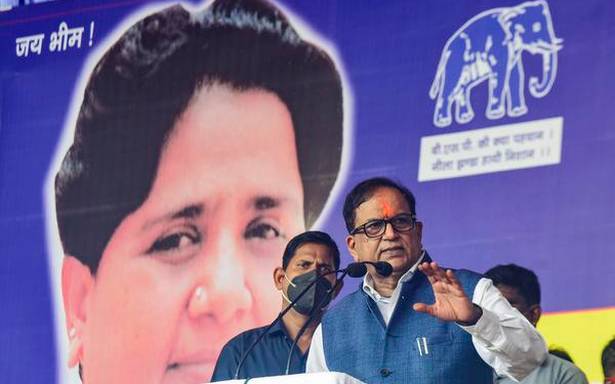 In a bid to woo the dominant and influential Brahmin community ahead of the 2022 Uttar Pradesh Assembly election, the Mayawati-led Bahujan Samaj Party (BSP) on Friday promised to expedite the construction of the Ram Mandir in Ayodhya if it came to power with a full majority.

The BSP’s national general secretary and its Brahmin face Satish Chandra Mishra launched a fresh outreach programme for the community from Ayodhya where the Ram temple is being constructed. It must be noted that the BSP identifies itself as an Ambedkarite party and while in power constructed parks, memorials and statues of Dalit and Backward Caste icons.

“When we form a full majority government in 2022, I would like to assure you that the lakhs and crores of rupees they have hoarded but are not putting to use to build a temple for bhagwan Shri Ram, we will compel them to build a grand temple,” Mr. Mishra said.

At a public meeting of the prabudh varg, or enlightened class, aimed at the Brahmins, Mr. Mishra questioned the slow speed of the construction of the Ram Mandir, the foundation stone for which was laid by Prime Minister Narendra Modi on August 5, 2020.

Mr. Mishra, virtually the second-in-command in the BSP, said even the foundation block of the temple was not yet complete.

“Nobody knows when they will complete the temple. How many years more will it take,” he asked at the gathering of Brahmins.

Ms. Mayawati recently reminded the Brahmins to emulate the Dalits and remain firm in voting for the BSP, without falling for any lure or temptation by other parties particularly the BJP. She also outlined that her 2022 campaign would heavily rely on the prospects of consolidating the sizeable Dalit votes and the Brahmins.

The BSP has often claimed that this formula had led to Ms. Mayawati’s phenomenal majority win in 2007.

At the public meeting, Mr. Mishra reiterated the BSP chief’s remarks. He urged the Brahmins to “come together and showcase your strength” if they wanted to emerge as the descendants of Lord Parshuram and Chanakya, considered icons of aggression and strategy by the community.

If the Brahmins built a “brotherhood” with the Dalits, the two communities alone could come together as a strong force in the State, Mr. Mishra said.

Not just the Brahmin vote, the deeper aim of such meetings appears to be an attempt to cash in on the capability of the community to influence other castes given the hierarchical social setup in the State. While talking to reporters after praying to Lord Ram at the makeshift Ram Janmabhoomi temple and at the Hanumangarhi temple and completing rituals at Saryu Ghat with his family, Mr. Mishra hinted at this goal.

“And you know that when the Brahmin comes, people of sarv samaj also come,” Mr. Mishra said.

The BSP leader has also said he would provide all legal help required by Khushi Dubey, the widow of Amar Dubey, one of the associates of Vikas Dubey who gunned down last year following the killing of policemen in Bikru. Ms. Dubey, a Brahmin, is implicated in the case.

Under the BJP government, the Brahmins were being neglected and faced oppression, claimed Mr. Mishra.

The Rajya Sabha MP also hit out at the BJP asking if it controlled the rights over Ayodhya, Lord Ram and Lord Hanuman and accused the party of taking false credit for the Ram Mandir, pointing out that it was being constructed on the directions of the Supreme Court.

After Ayodhya, these meetings, targetted at a discussion on the “honour, safety & progress” of Brahmins, will be held in Ambedkar Nagar, Prayagraj, Kaushambi, Pratapgarh and Sultanpur this month.