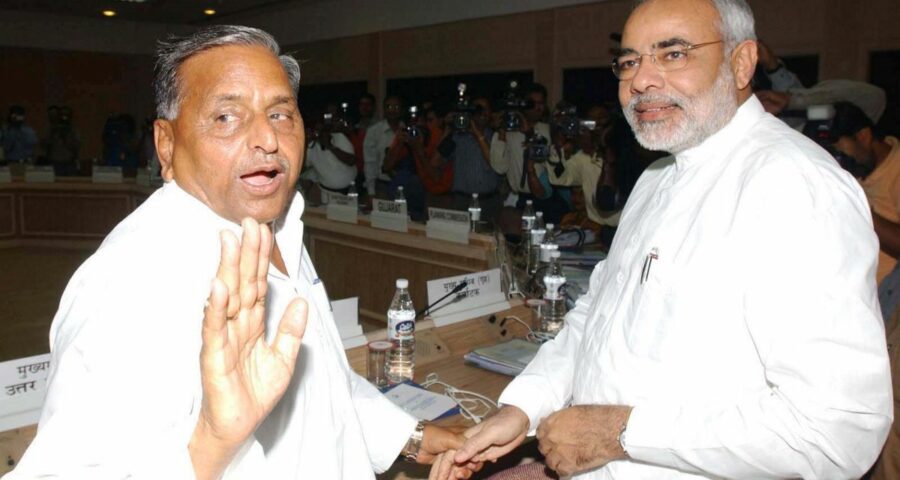 While Modi had a party and an organisation that supported him, all Mulayam, a self-made man with no inheritance in politics, had was a set of (fairly flexible) beliefs, recalls Aditi Phadnis.

A vigorous and central force in the politics of Uttar Pradesh — and later, India — Mulayam Singh Yadav’s passing will leave a void that no leader can fill.

This was the man who used to run the government in Uttar Pradesh, India’s most populous state. With 80 seats out of the Lok Sabha’s 545, it was believed that the road to becoming prime minister had to pass through UP: Narendra Modi acknowledged as much when he shifted out of Gujarat to seek a Lok Sabha seat from UP.

In some ways, Mulayam Singh Yadav was like Modi: A self-made man with no inheritance in politics.

Modi had a party and an organisation that supported him. All Mulayam had was a set of (fairly flexible) beliefs.

He was first elected to the UP assembly in 1967 on the ticket of the Samyukta Socialist Party led by Dr Ram Manohar Lohia, one of India’s best-known Socialists.

Following Dr Lohia’s death, he joined the Bharatiya Kranti Dal headed by Charan Singh in 1968. In 1974, the SSP and the BKD merged to become the Bharatiya Lok Dal and gave him a ticket.

The Indira Gandhi government declared a state of Emergency in 1975, and Yadav was in Etawah jail for 19 months. Like everyone else, he won when he came out of jail and contested assembly elections as a BLD candidate. He was appointed minister for the first time in his life, with the charge of cooperatives.

Yadav’s USP in politics was his sway over Uttar Pradesh. His moves in UP politics sometimes earned him the sobriquet of an opportunist. But somehow, he retained his credibility with voters.

More importantly, he had friends in the multiple factions of anti-Congress groups.

The 1989 Lok Sabha elections were held against the backdrop of the rise of Hindutva sentiment.

V P Singh’s campaign against corruption paid off. Yadav supported both Chandra Shekhar and V P Singh and equivocated briefly, but had no choice but to let the former down when Devi Lal announced V P Singh as prime minister and Chandra Shekhar left the Central Hall of Parliament in humiliation.

The Janata Dal leadership backed Mulayam Singh’s claim for UP chief ministership against Ajit Singh’s. He became chief minister for the first time in 1989.

One was an anti-English movement, which he led and promoted in UP.

In 1990, the compulsory English paper was withdrawn from the Provincial Civil Service examination conducted by the state Public Services Commission.

Courts, the local administration and other establishments were mandated to work in Hindi.

He argued that English was the ‘language of the oppressor’.

Things were heading for an ugly turn when the issue on which he made his reputation flared up.

This was the Ram Janambhoomi movement. And then, the call for implementing the Mandal Commission report for reservations for Backward Classes further complicated Indian politics.

According to a Centre for the Study of Developing Societies analysis, in the 1998 Lok Sabha elections, the Samajwadi Party social base had support from 75 per cent of the Yadavs and 72 per cent of the Muslims in Uttar Pradesh.

This resulted from a constant projection by the SP that the Bharatiya Janata Party was the biggest threat to the minorities and it was the only party capable of protecting them.

This led to the great clash: Yadav was chief minister in 1990 when kar sevaks passed through UP, with the chant of ‘mandir wahin banayenge‘.

Yadav dealt with the problem as an issue of law and order: He asked the police to fire on the kar sevaks. The number of those who died is disputed, but the demolition of the Babri Masjid in 1992 was the direct outcome of the rage of the majority.

Everyone thought this was a blow from which Yadav would never recover.

But the intervening years saw more of Yadav in national politics.

The Samajwadi Party was formed in 1992, identifying clearly with anti-Congressism, empowerment of the backward classes and secularism.

Old-timers in the party were in a bind — they recognised Akhilesh’s contribution, but did not want to offend Mulayam.

Uncle Shivpal had already made a claim. There was another uncle, Ramgopal, who was backing Akhilesh at the time.

When Akhilesh did become CM, it was a poisoned chalice. His father, with whom he never had a conventional relationship, became an even more remote figure.

A phase of family bloodletting followed. Mulayam asserted publicly that the SP was his party — it was, but now it was also Akhilesh’s, something the patriarch was unwilling to accept.

Father and son then issued separate lists of candidates for the upcoming assembly election. The matter moved to the Election Commission, and funds were frozen.

Horrified SP supporters shook their heads. In 2017, weeks before the assembly election, the EC decided in Akhilesh’s favour. By then, it was too late.

Mulayam’s exit was slow but inevitable. The cameo moment was the entry — and exit — of Mulayam Singh Yadav from the Lok Sabha during the 2021-2022 Budget speech.

Walking slowly, assisted by a helper, Mulayam made his painful way down many shallow steps. While walking out, he spotted Majlis-e-Ittehad ul Muslimeen leader Asaduddin Owaisi, the man who would arguably be responsible for the last assembly election setback for the SP.

But the warmth with which the elder Yadav greeted Owaisi — who also bent to receive blessings — transported the moment to another era.