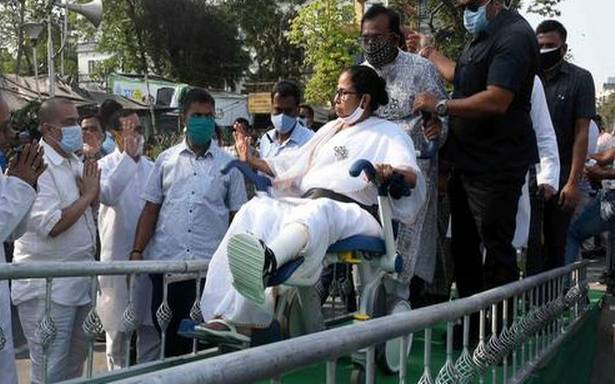 The West Bengal Chief Minister is facing her erstwhile protege and now rebel Suvendu Adhikari who joined BJP on the eve of the election.

In the high-stakes battle of Nandigram Assembly constituency that goes to the poll on April 1, West Bengal Chief Minister Mamata Banerjee will camp for three days beginning from Sunday addressing seven public meetings and two roadshows.

She is facing her erstwhile protege and now rebel Suvendu Adhikari who joined BJP on the eve of the election, leaving her usual constituency of Bhabanipur. The contest is also for the ownership of the Nandigram agitation against land acquisition by the then Left Front government in 2008-09. Mr. Adhikari was the local Trinamool Congress face of the movement.

Her three-day halt in Nandigram constituency will begin with a visit to the Reyapura Shib Mandir Dol Mela at 4.00 p.m. on Sunday followed by a public meeting. Monday and Tuesday are heavy days for her with three public rallies and one roadshow each day. The idea is to cover the length and breadth of the Assembly constituency.

The BJP is also pulling all stops. Home Minister Amit Shah will be addressing a public meeting here on Tuesday, the last day of campaigning.

Ms. Banerjee’s camping in Nandigram for three days has given her political opponent ammunition to question her party’s confidence in the Assembly poll.

The BJP already has been running a campaign about Trinamool’s “nervousness” regarding Nandigram releasing the audio tape where the Chief Minister is reportedly asking for help from Proloy Pal, BJP’s district vice-president in Nandigram.

“Mamata Banerjee has always said that she is the candidate from all 294 seats. The fact that she is spending three days in Nandigram betrays her nervousness. Right now, it seems her only priority is to win Nandigram,” said Dinesh Trivedi, a founding member of the Trinamool who joined the BJP last month.

The TMC, however, says that this is not very unusual and every candidate does this. “It is a pointless argument to ask why she is spending three days in a constituency where she is contesting from. Had she not gone, then these very people would have claimed that she is ignoring Nandigram,” party leader Saugata Roy said.

Political researcher Sajjan Kumar, said that it would be a very close contest. “By contesting from Nandigram, Mamata Banerjee has scored the perception advantage of owning up the Nandigram movement. Also there is a committed Muslim electorate who are firmly with the TMC. Though, Ms. Banerjee is finding it difficult to contest the emotional and personal connect that Suvendu Adhikari has,” Mr. Kumar told The Hindu. Out of the 2.75 lakh registered voters here 62,000 are minority voters.