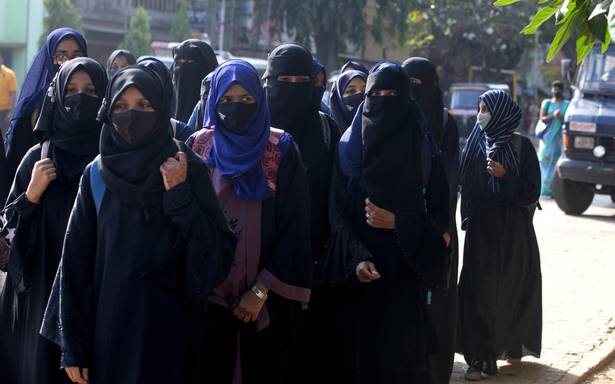 A video on the hijab row that is rocking coastal Karnataka

Echoes of the controversy are being heard in other parts of Karnataka too, even as a political slugfest is unfolding on the communally sensitive issue.

Several political leaders including Mehbooba Mufti and Rahul Gandhi have voiced their condemnation on twitter.

How did it start?

Six female students belonging to the Government PU College for Girls in Udupi were not allowed to attend classes wearing hijab.

The students protested on December 31, 2021, claiming the college was not allowing them to attend classes for the past 15 days.

Udupi BJP MLA Raghupathi Bhat, who heads the college’s development committee, held a meeting with parents and other stakeholders.

The students filed a writ petition in the Karnataka High Court, and also approached the National Human Rights Commission.

Why did other educational institutions get involved?

Following this incident, a group of boys at the Government Pre University College in Kundapur went to college sporting saffron shawls in protest against some girls attending classes wearing hijab.

Kundapura MLA Haladi Srinivas Shetty held a meeting with parents and asked students to comply with the dress code of the college till the government takes a final decision on the issue.

The MLA said that some girl students of the college have been coming to class sporting hijab for the last about five days.

The girl students, on the other hand, have argued that they cannot be forced to stay out of the college following a ‘sudden change in the dress code’ to bar hijab.

To counter girls wearing hijab, several Hindu boys have been turning up wearing saffron shawls, but they too have been barred from entering classrooms.

Such cases have been reported in several colleges in Udupi district in coastal Karnataka.

The row took a new turn in Chikkamagaluru when students of IDSG Government First Grade College arrived wearing blue shawls. They chanted Jai Bhim slogans and raised their voice in support of Muslim girls. They said they were in support of wearing hijab in colleges as part of religious practice.

What has the government said?

The Karnataka Government issued an order stating that students have to comply with the uniform/dress code prescribed by College Development Committees.

The department has issued a circular based on these rules and appealed to students to follow uniform rules prescribed by colleges till the High Court pronounced its verdict on the matter.

Though uniform is not mandatory in colleges, College Development Committees, often headed by local MLAs, have been insisting on a dress code, including banning hijabs, in Udupi and other districts.