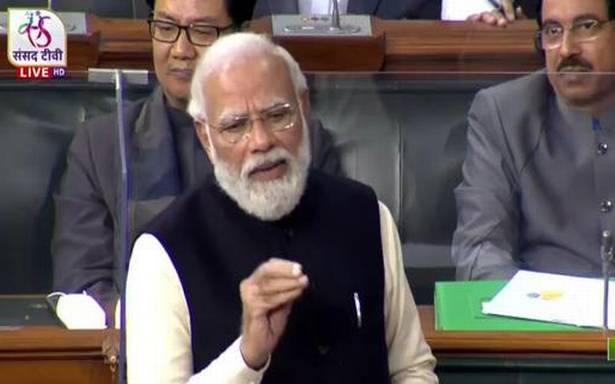 Prime Minister Narendra Modi’s remarks during his reply to the debate on the Motion of Thanks for the President’s Address to Parliament drew sharp reactions from the main political parties in Telangana and Maharashtra on Tuesday.

State Finance and Health Minister T. Harish Rao criticised the Prime Minister for “spewing venom” against Telangana and hurting the sentiments of the people, saying that the Centre had denied the State its due. The Centre was insisting on electricity meters for agricultural connections to release the grants, but the State government turned it down, he said. “Chief Minister K. Chandrasekhar Rao is against the installation of meters to farm connections and committed to continuing free power to ryots,” he said.

State Congress chief A. Revanth Reddy said: “It is not appropriate for a person holding high position to raise such irrational issues. The comments on Telangana expose that the Prime Minister has no respect for elected bodies or Parliament.”

He said the BJP had came up with the slogan “one vote, two States” in 1998, but deceived the people after coming to power the next year. “The party which ensured formation of three other States did not keep its commitment on Telangana. The lives of 1,200 plus people, who died for the cause of Telangana, could have been saved had the BJP kept its promise of bifurcation then,” he said.

Responding to Mr. Modi’s statement about the spread of COVID-19 during the first wave, all three major parties in Maharashtra demanded an apology from him and the BJP for making ‘snide’ comments against the State. The Congress said it would hold protests outside BJP offices across Maharashtra on Wednesday.

“The Congress party and our State government took steps to help people in distress during the first wave of COVID. We provided them food, shelter and tickets to take them to their home so they can live with their loved ones. The BJP and Modi were busy lighting lamps and banging thalis at that time. The PM has made fun of workers and their poverty. He has made fun of Maharashtra’s efforts to help the poor…,” said State Congress president Nana Patole, adding that even the BJP leaders in the State should protest.

NCP Lok Sabha MP Supriya Sule in Delhi said: “Mentioning Maharashtra as a super spreader of Corona was not only unfortunate but an insult of voters who had voted BJP in Lok Sabha polls to make you (Modi) Prime Minister.” She said the PM’s speech should have provided direction to the country for future, but instead he had insulted Maharashtra.

Stating that Railways came under the Central government, Ms. Sule said: “It was the Centre’s decision to arrange trains. The then Railway Minister Piyush Goyal and former CM Devendra Fadnavis have been praising the Railways for the same. Why attack a State?”

“When Shramik Trains started, can the nation forget how these poor labourers who were left with no income were being charged for ticket? The State government stepped in to pay their fare. If that is a mistake in the eyes of the PM, willing to commit this mistake 100 times over,” tweeted Shiv Sena Rajya Sabha MP Priyanka Chaturvedi earlier on Monday.

Defending Mr. Modi, BJP MLA Ashish Shelar accused the three other parties of being instrumental in spreading the coronavirus in the entire country. “These three parties are real anti-Maharashtra. These three parties brought the poor on road and made them go to their homes despite the COVID situation,” he said.