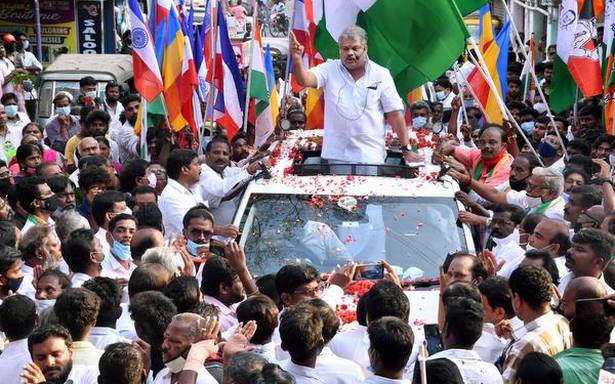 Voters should vote against the Dravida Munnetra Kazhagam that has made false promises in its manifesto, Tamil Manila Congress leader G.K. Vasan appealed to voters here on Sunday.

He campaigned in support of Municipal Administration Minister and AIADMK Thondamuthur candidate S.P. Velumani. With the aim of disrupting the development that the AIADMK government has ushered in the last 10 years, the DMK was making false promises in its manifesto.

Voters should give AIADMK another chance for the continuance of good, people-oriented schemes, Mr. Vasan said.

Mr. Velumani could not be confined to Thondamuthur alone. As the Municipal Administration Minister he had helped local bodies across the State implement several good schemes. Therefore, he was a politician who had looked after the entire State, Mr. Vasan said.