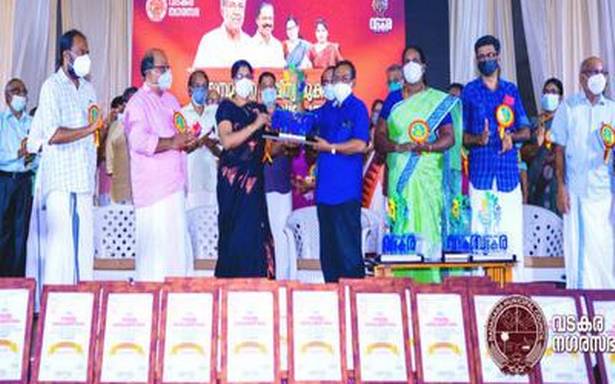 Vadakara Municipality in Kozhikode district is the first zero-waste local body in Kerala. Minister for Local Self-Governments M.V. Govindan made the declaration on Saturday and said that Vadakara was a model for the whole State to achieve zero-waste status in five years.

Vadakara MLA K.K. Rema, who presided over the event, said efforts would be made to emulate the model of the Vadakara Municipality in all local bodies in her constituency. Tourism Minister P.A. Mohamed Riyas, District Collector N. Tej Lohit Reddy, State Coordinator of Nava Kerala Mission T.N. Seema, members of administrative panel of the municipality besides district coordinators of the Suchitwa Mission, Kudumbashree and Haritha Keralam Mission took part in the event.

The Chairman’s Trophy for the best ward was awarded to wards 29 and 40 of the municipality for achieving 65% of the targeted hygiene. St. Antony’s Girls High School is the zero-waste school, while the Government Ayurveda Hospital, the Nalladathu Anganwadi, and the Vadakara railway station bagged the awards in their respective categories.

Vadakara, which has earned many awards in the waste management front, is known for its out-of-the-box efforts to ensure proper segregation and disposal of waste, including recycling and upcycling it. It had come up with a hygiene protocol a few months ago, which played a major role in achieving the zero-waste status. The Hariyali Haritha Karma Sena of the municipality, with its expertise in the field, has developed into a green consultancy giving technical guidance to other local bodies. It has also ventured into the tourism sector, managing the Vadakara Municipal Park and Sand Banks beach. Its role in converting waste dumping yards in the town into parks has been appreciated widely, as it denoted that Vadakara no longer had solid waste to dump anywhere.