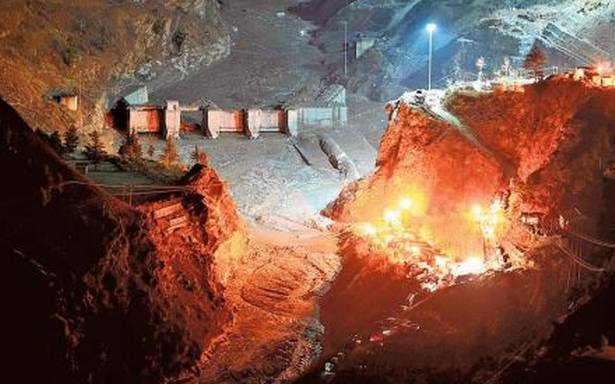 Migrant workers from U.P. are hoping that their missing kin, colleagues will be rescued

Shyamu Kumar (22) from Uttar Pradesh had joined work at the hydro project at Tapovan in the neighbouring Uttarakhand barely three weeks ago, but the damage caused to the project by the sudden floods in the tributaries of the Ganga has already thrown his life into uncertainty.

However, for now, he is more than glad to be alive.

Kumar, a construction labourer from Lakhimpur Kheri district of U.P., was on night duty on Sunday and sleeping in one of the designated tin rooms for labourers at a safe height above the devastation. In recent days, he was engaged in construction work at a barrage.

“When the flood submerged everything, my nephew woke me up saying ‘Uncle, the glaciers have cracked, we need to get away from here.’ The barrages were all submerged,” Kumar told The Hindu on the phone from Tapovan on Tuesday. He is still haunted by the spectacle of the mammoth and violent waves of water gushing down the mountains.

But he is more worried about the well-being of his colleagues and friends from back home. Are they still trapped in the tunnels? Will they be rescued or have they been washed away? Ramu (20), his neighbour from Lakhimpur Kheri — Kumar is from Tikunia village — was working inside one of the tunnels when the waters struck. “He used to call me mama [maternal uncle]. We came here together to work. I am saddened… I have little hope that he will be found alive,” Mr. Kumar said.

Like thousands of young men from the region, Kumar and his colleagues had come here in search of a better livelihood. At the Tapovan project, he was recruited on a salary of ₹14,000, more than thrice the amount he could hope to get back in his village or nearby kasba. “There are not many opportunities there,” he said.

Three days after the incident, U.P. has identified 71 persons belonging to the State who are still untraceable after the tragedy from various sites, State Relief Commissioner Sanjay Goyal told The Hindu. The numbers could still go up, he said. Most of these persons (34) belong to Lakhimpur Kheri, followed by Saharanpur (10), Shravasti (5), Gorakhpur (4), Amroha (2), Deoria (2) and Bijnor (2). The list includes labourers, fitters and site engineers, said the official. The details, he said, were yet to be confirmed by their kin.

One of those declared dead was reportedly identified as being from U.P. but confirmation was still awaited from the Uttarakhand officials, said Mr. Goyal. Acknowledging the grim situation, he said the chances of tracing missing persons alive after three days were “remote.”

Suraj (24), who hails from the Tharu tribal community, who inhabit the Terai region, was also fortunate to be on night duty that day. Suraj has been working in Uttarakhand for four years. He acknowledges the risky nature of his job, of working in the tunnels. But nothing had prepared him for the frightening sight of the marauding waters.

“I was sleeping when one of the boys who was on day shift woke us up. Debris, mud and the icy water were rushing down and had risen to a trmendous height… it seemed like waves in an ocean,” Suraj said. Words could not adequately express the fear he felt then, he said.

Suraj does not know if and when work would resume at the heavily damaged site. Rescue operations are still on. For now, he is stationed in Tapovan, waiting to hear about his cousins Hari Shankar Chaudhary and Shankar Chaudhary who are still untraceable. They were working at the barrage at the time.

In several villages of Lakhimpur Kheri, many locals fear the worst.

Pramod Kumar, a farmer from Bhairampur village, says he was able to communicate with his brother Tiwarilal and nephew Raviraj on the day of the incident, after the initial scare.

“I was eating when my nephew called me 15 minutes after the incident. He told me everything had been washed away and that my bhaiya [elder brother] was untraceable. I could not eat after that. Later, I came to know that my brother had managed to climb a ladder and was safe,” he said.

Pramod Kumar, who had visited the site in Tapovan in the past, said he could imagine the devastation such a large flow of water would cause and knew “it would be impossible to survive.”

Mr. Goyal said the State was compiling information about the missing persons from all sources and sending it to the neighbouring State. Discussions are also on about possibly sending the bodies recovered to U.P. “if they are in a position to be brought, or take a call after consultation with the family members,” Mr. Goyal said.

Chief Minister Yogi Adityanath has deputed several senior officials to Uttarakhand and instructed them to coordinate with officials in Uttarakhand. He has instructed officials to provide all possible help to the families in bringing back the bodies of their kin, a government statement said.

The State government has released a helpline number 1070 and Whatsapp number for people to register information about their family members.