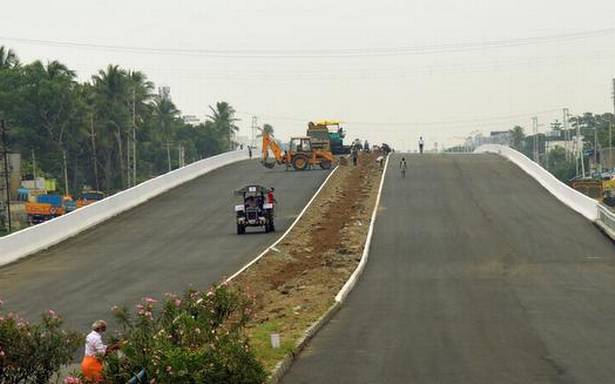 Construction of the vehicular underpass at Kondayampettai-Sanjeevi Nagar intersection on the city stretch of Tiruchi-Chennai National Highway is nearing completion.

The underpass with road overbridge above it is almost and the final stages of the work would be completed within 10 days, according to sources in National Highways Authority of India (NHAI).

“The work is almost complete; the final layer of the road has to be laid and road markings have to be done. With the rains over the past few days, it may take a few days. We expect the works to be completed within the next 10 days,” an official of the NHAI said.

Already, vehicles are being allowed to ply on the ROB and underpass. Traffic on the carriageways is allowed alternatively and regulated depending on the works.

With construction work on the new facility, along the busy Chennai Bypass Road, here had proceeded swiftly. The project commenced in October last year but was interrupted in January due to unseasonal rains and later due to the lockdown restrictions. However, the works resumed quickly and has been completed within the scheduled period of a year. “The project is in fact cited as a model for timely completion within the scheduled period,” the NHAI official said.

Construction of the underpass would meet a felt need of motorists and residents. Accidents became frequent at Kondayampettai intersection ever since the bypass road was made a four-lane highway by NHAI. Hundreds of vehicles, including lorries and buses, cross the highway at the intersection from either side, creating chaos.

Police have been forced to place multiple barricades to regulate vehicles. It was sanctioned in 2015 after public outcry over a spate of accidents at the spot and an inspection by former Union Minister of State Pon. Radhakrishnan.

The underpass, along with seven minor bridges along the city stretch of the bypass road, was sanctioned at a total cost of about ₹30.8 crore. Once complete, the vehicular underpass is expected to ensure free flow of highway traffic on both directions and reduce congestion at the intersection.