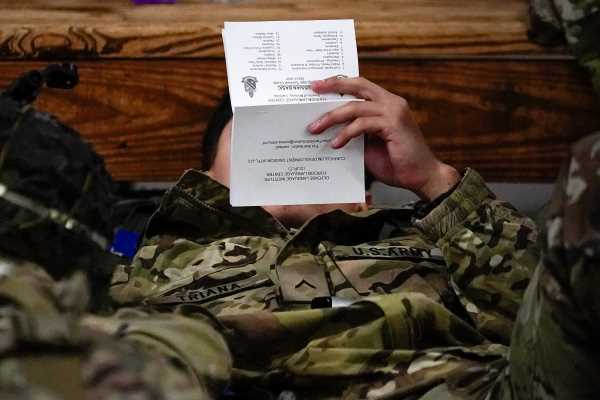 A convoy with military equipment of the Russian southern military district units crossed the Crimean bridge on the way to the places of permanent deployment following the planned drills in Crimea, the Russian defence ministry said on Wednesday.

“The units of the southern military district, which have completed participation in tactical exercises at the test sites of the Crimean Peninsula, are heading to the points of permanent disposition by rail. The personnel of the unit conducted the loading of caterpillar-tracked armored vehicles — tanks, infantry fighting vehicles, and self-propelled artillery weapons on railway platforms at entraining stations,” the ministry said in a statement, reported Sputnik.

Furthermore, the Russian defence ministry said on Tuesday that some of the troops gathered around Ukraine are being sent back to their bases. However, other drills, including in Belarus and off Ukraine’s Black Sea coast, were continuing.

Russian President Vladimir Putin hinted that he was looking for a diplomatic way to get out of the crisis while reiterating the view that he did not want war.

At the same time, Putin never wanted Ukraine to join the North Atlantic Treaty Organisation and for this, he would keep alive the negotiations to achieve this key goal.

On this US President Joe Biden on Tuesday said that Washington is ready to respond decisively to the Russian attack on Ukraine.

“We are ready to respond decisively to the Russian attack on Ukraine which is still very much a possibility,” Biden said in remarks at the White House.

President Biden acknowledged reports on Tuesday that Russia has ordered the partial withdrawal of its troops near Ukraine’s borders, but stressed that the US has ‘not yet verified’ the Kremlin’s claims and that an invasion remains ‘distinctly possible.’

“We have not yet verified that the Russian military units are returning to their home bases — indeed, our analysts indicate that they remain very much in a threatening position, and the fact remains right now Russia has more than 150,000 troops circling Ukraine and Belarus, and along Ukraine’s border and invasion remains distinctly possible,” he said.

“We are not seeking direct confrontation with Russia though I have been clear if Russia targets Americans in Ukraine, we will respond forcefully,” the US President asserted.

Notably, over the past few months, the United States and its European partners have grown worried about Russia’s military activity near the Ukrainian border in alleged preparation for an ‘invasion.’

Moscow has denied the accusation, repeatedly stating that it is not threatening anyone and at the same time expressing strong concerns over NATO’s military activity near Russian borders, which it deems a threat to its national security. Moscow has also said it has the right to move troops within its national territory.

British defense secretary Ben Wallace also said, “It’s too soon to tell whether the pullback is genuine, noting that the Russians haven’t taken the foot of the gas.”

“I think what we haven’t seen is evidence of withdrawal that has been claimed by the Kremlin,” he told Sky News.

“In fact, we’ve seen continued buildup of things like field hospitals and strategic weapons systems. Until we see a proper de-escalation, I think we should all be cautious about the direction of travel from the Kremlin,” said Wallace.

Russian fighter planes conducted training missions over Belarus that neighbours Ukraine to the north and paratroopers held shooting drills at firing ranges there as part of massive war games which the Western nations suspected that it could be used as cover to invade Ukraine.

Allaying concerns, Belarusian foreign minister Vladimir Makei said that all Russian troops would leave the country after the maneuvers wrap up on Sunday.

Russia ruled out any invasion plans and mocked Western warnings about an imminent invasion as ‘hysteria’ and ‘madness.’

Putin, who spoke to German Chancellor Olaf Scholz, on Tuesday said that the West agreed to discuss a ban on missile deployment to Europe, restrictions on military drills and other confidence-building measures — issues that Moscow put on the table years ago.

He further said that it would do so only in combination “with the main issues that are of primary importance for us.”

While Scholz reiterated that NATO’s eastward expansion is not on the agenda, Putin retorted that Moscow will not be assuaged by such assurances.

“They are telling us it won’t happen tomorrow,” Putin said.

“Well, when will it happen? The day after tomorrow? We want to solve this issue now as part of negotiation process through peaceful means.”