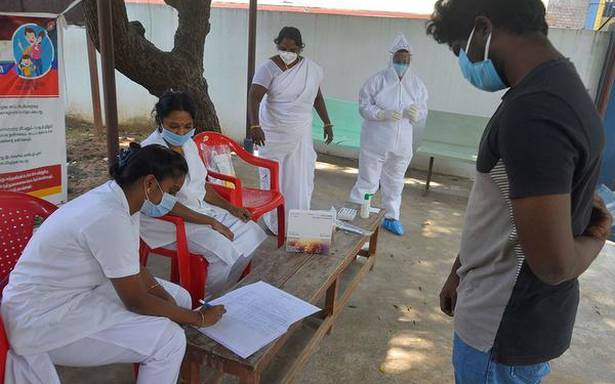 ‘Testing ramped up in Karaikal in the wake of pilgrim influx’

The COVID-19 toll in the Union Territory went up to 635 on Monday with the coronavirus claiming two more lives in the last 24 hours.

A 72-year-old woman died at the centrally administered Jipmer, the other patient (66) succumbed to the infection at the government-run General Hospital. Both had underlying co-morbidities, a bulletin said.

Meanwhile, testing has been ramped up in Karaikal in the wake of an influx of pilgrims recently, Lt. Governor Kiran Bedi said after a review.

A COVID war room location had been identified to drive operations in Karaikal. While test numbers have been increased and positivity rate brought under control, the volume of RT-PCR tests as against Rapid Antigen Tests would be raised.

Testing infrastructure has been set up in the private medical college to conduct at least 100 RT-PCR tests per day with staff working in three shifts. In addition, six mobile teams have been pressed in to service to undertake community-level testing. It is proposed to draft in field staff of line departments, NSS and NCC volunteers for surveillance.

ASHA workers would be dedicated for vaccination and their roles in contact tracing and surveillance entrusted with Anganwadi workers, Ms. Bedi said. Fines collected for Covid violations would be expended on purchasing equipment, such as thermal scanners and oximeters.

The Union Territory, meanwhile, reported 29 fresh cases during tests carried out on 1,788 samples while 28 patients recovered and were discharged. Puducherry accounted for 23 new cases and Mahe six. No new cases were reported in Karaikal and Yanam regions.

The number of samples tested by the Health Department to date aggregated to 4,96,376 with 4,53,709 persons testing negative.