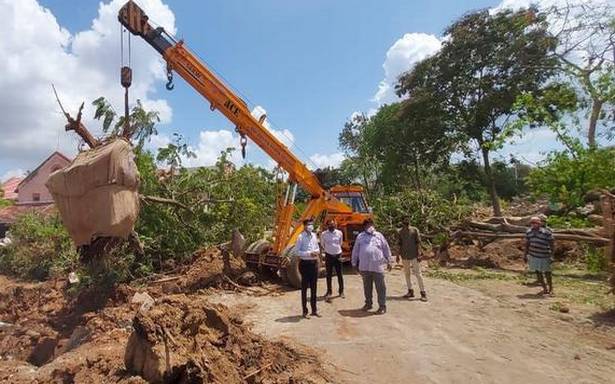 Visakhapatnam-based experts roped in the initiative

The translocation of at least 49 trees, which are three-decade-old, is in full swing, aiming at conserving them instead of axing for construction of new buildings on the campus of the Kakinada Municipal Corporation office in East Godavari district.

Launched on May 19 on a pilot basis, the initiative is being done under the aegis of the Kakinada Smart City Corporation Limited (KSCCL).

The Kakinada Smart City Corporation Limited authorities have roped in the Visakhapatnam-based nursery, Balaji Nursery, for the translocation of the identified 49 trees.

Kakinada Municipal Corporation (KMC) Commissioner Swapnil Dinakar told The Hindu on Friday; "We have determined not to fell the old trees for any proposed developmental works in the city. We will commit not to fell any tree for any development works if the translocation initiative is succeeded”.

The translocation of certain species of trees has witnessed at least 90% of survival in the previous attempts done in Tirupati and Visakhapatnam cities.

“The species of the 49 trees have been identified that they will survive the translocation if timely care is taken for two months. All the trees have been uprooted and now under the stage of organic treatment to its roots”, said Mr. Swapnil.

The trees are being conserved at the Akshara school area in the city, where they would be replanted on both sides of the road.