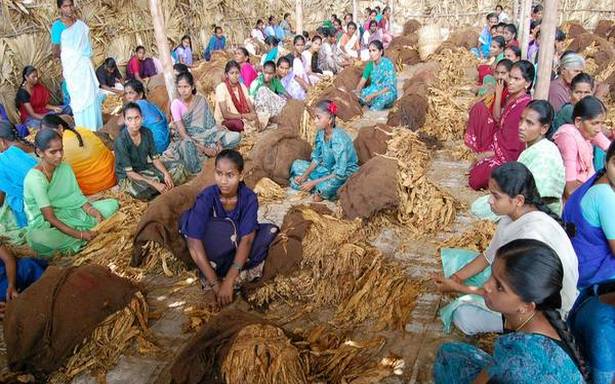 Market intervention by govt. sought to create buoyancy in market

Having suffered heavy loses owing to the cyclonic storm Nivar last year, the tobacco growers in the drought-prone pockets of Prakasam and Nellore districts have pinned high hopes on the auction of the crop, which is all set to begin on March 15 (Monday).

After the cyclone took a toll on their crops, the farmers in the traditional tobacco growing areas in these districts went for replanting as the rains in several spells delayed the cultivation during rabi.

With the prices of the F1 and F2 tobacco varieties crossing the ₹260 per kg-mark in the neighbouring Karnataka, where it is grown as a kharif crop, the farmers here are hopeful that the auctions would start on a positive note this year at six platforms in the Southern Light Soil (SLS), including D.C. Palli and Kaligiri in Nellore district and five platforms in the Southern Black Soil (SBS) regions.

The auctions in the SLS region, which otherwise begins in the mid-February, have been delayed this time. “We have been incurring losses since the last three years owing to poor grade yield and the coronavirus-induced lockdown in the middle of the marketing season last year. We expect the auctions to start on an encouraging note this time, given the decrease in production,” said farmer leader and former Tobacco Board member Ch. Ranga Rao.

He opined that the State government, like last year, should direct the MARKFED to intervene to create buoyancy in the market.

“Farmers should get the benefit of the cut in tobacco crop size by the crop regulator, which anticipated a reduced demand for the produce in the wake of COVID-19 pandemic. The crop size was cut down by 15%,” he pointed out.

“Such prices will help the farmers to achieve a break-even as they had to bear additional expenditure during the cultivation this year. The farmers were forced to go for replantation in view of the unseasonal rains in several spells during the cropping season,” said Mr. Bangarababu.

According to an estimate made by the Tobacco Board, the production this year is expected to be about 1 million kg less than the authorised crop size of 70.3 milliom kg in Prakasam and Nellore districts, SBS Regional Manager R. Srinivasulu Naidu.