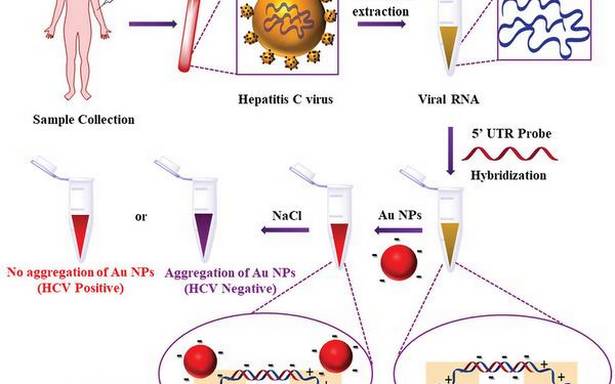 COVID-19 is not the only virus haunting human beings. Hepatitis C Virus (HCV) is no less dangerous as it causes liver cirrhosis and cancers. “Find the Missing Millions” is the theme of the World Hepatitis Alliance (WHA) to show that millions are unaware of the asymptomatic conditions, and how critical it is to find those undiagnosed and linking them to clinical care.

The World Health Organisation (WHO) has set an ambitious target of eradicating HCV by 2030, which means extensive screening is imperative to completely eradicate the virus. Researchers at BITS Pilani, Hyderabad campus, have announced development of a gold nano particle-based diagnostic kit, which is cheaper and quicker for early-stage detection of HCV infection.

The diagnosis of the viral infection is usually done using serological tests to detect the viral antigens using immuno-based assays like ELISA and the molecular tests using reverse transcriptase quantitative polymerase chain reaction or RT-qPCR. Serological tests are effective only when there exists sufficient production of antibodies against the viral antigen and are typically detected at a later stage of active infection, said lead researchers Prof. Ramakrishnan Ganesan of the Chemistry Department and Prof. Jayati Ray Dutta of Biological Sciences Department.

Early stage of confirmatory detection of viral infection can be done through RT-qPCR (considered the gold standard) but it requires sophisticated infrastructure and trained personnel besides taking time and considerable cost.

The diagnostic kit developed by BITS Pilani, Hyderabad, researchers is affordable, matches the high accuracy close to that of RT-qPCR and can be done in one hour flat as against 4-6 hours, they claim, along with their team Almas M. Shamaila, Aniket Balapure and Mahammad Nanne Khaja.

The kit also has a lower detection limit of 100 IU/mL, the threshold value for discontinuing the anti-retroviral therapy.

Their work has been jointly undertaken with a city based firm, Bioviz Technologies Pvt. Ltd, and can be easily adopted in the rural health sector and be used for mass screening due to the lower cost. “Our kit can help in early-stage detection to diagnose more population for an early detection of asymptomatic cases and treatment through the anti-retroviral drugs,” testified the researchers in a press release.

The work of the researchers has been published in the journal ‘Analyst’ (Royal Society of Chemistry, United Kingdom) Naked-eye colorimetric detection of HCV RNA mediated by a 5’ UTR-targeted antisense oligonucleotide and plasmonic gold nanoparticles – Analyst (RSC Publishing).