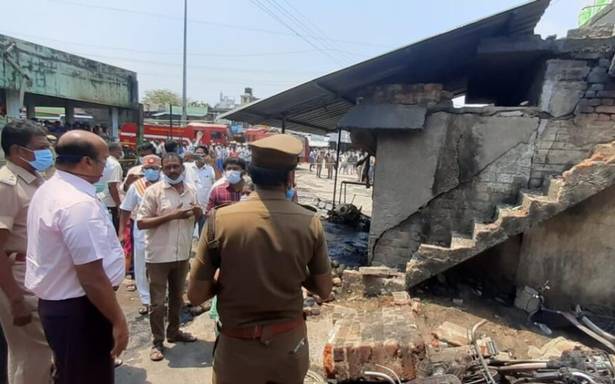 Three persons, including two children, were killed in a fire that broke out at a cracker shop in Latheri, near Katpadi in Vellore district on April 18.

The victims were identified as Mohan, 55, a shop keeper and his grand children — Thejas (7) and Dhanush (6). The shop, which sells crackers and groceries, is located near Latheri bus stop. Fire broke out in the noon and the cause of fire is not known immediately.

Preliminary investigation revealed that the children were with their grandfather at the shop at the time of occurrence. Thick ball of fire enveloped the shop and the three were caught inside. They were charred to death and the building was also completely damaged.

On receipt of information, Fire Service personnel from Katpadi and Gudiyatham fire stations rushed to the spot and put out fire. The charred bodies were retrieved and sent to Government Hospital, Adukkamparai, Vellore for post mortem.

The District Collector issued instructions to Revenue, Police and Fire Service departments to ensure all fire cracker shops should be closed on Sundays and all fire safety norms and license conditions are followed scrupulously.

No children/unrelated/related persons shall be allowed inside the shop. No fresh purchase of crackers till the summer season ends (June 30) by the licensee.

Even in the existing stocks, those crackers which may inflict heavy damages should be disposed immediately. Electric lines should be checked once again.

Joint inspection of all cracker shops should be done from Monday onwards, consisting of officials from Police, Revenue, Fire and TANGEDCO should be conducted without any omission, the Collector’s order said.

Possibility of relocating the shops to the outskirts of the city/village should be explored. Approach roads to the cracker shops should be checked to ensure that sufficient width was available for Ambulance and Fire tenders’ movement.