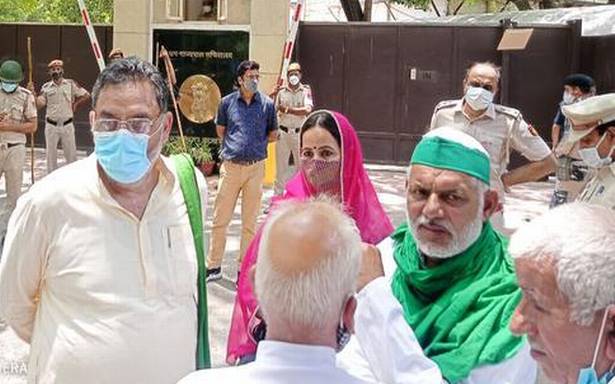 Apart from large gatherings at the established protest sites on the borders of Delhi, protests were also held within the capital.

Thousands of farmers marking the seven month anniversary of their agitation against three agricultural reform laws marched to Raj Bhavans in various states on Saturday, to submit a memorandum to President Ram Nath Kovind through the Governors. As June 26 is also the date that the Emergency was declared in 1975, the farm unions under the banner of the Samyukt Kisan Morcha also observed the day as Kheti Bachao, Loktantra Bachao Diwas (Save Agriculture, Save Democracy Day)..

Apart from large gatherings at the established protest sites on the borders of Delhi, protests were also held within the capital. Farmers marched to the Raj Bhavans in Punjab, Haryana, Tamil Nadu, West Bengal, Bihar, Madhya Pradesh, Odisha, Andhra Pradesh, Uttar Pradesh, Uttarakhand, Maharashtra and Telangana, although some were not able to deliver their memoranda, according to the SKM.

The SKM said that protestors had been picked up and detained by the police, sometimes temporarily, in Bhopal, Bengaluru, Mysuru, Delhi and Hyderabad. Bharatiya Kisan Union-Tikait group’s general secretary Yudhvir Singh was detained at Civil Lines in Delhi, according to the SKM. Among the security arrangements made in the capital was a decision by Delhi Metro to shut three stations in Central Delhi from 10 a.m. to 2 p.m.

In its memorandum, the SKM urged the President to direct the Union Government to “repeal the three anti-farmer laws and to enact a law that will guarantee remunerative MSP at C2+50% for all farmers.” Recounting the government’s suppression of their agitation, the farmers claimed that what they experienced was a reminder of the Emergency period 46 years ago. “Without declaring an Emergency, democracy is being throttled every day,” said the memorandum.

Agriculture Minister Narendra Singh Tomar reiterated his appeal to farmers to “end their agitation.” Posting a video statement on Twitter, he said that the Centre was also “ready to discuss and to resolve any provision of the laws” which the farmers were protesting against. However, the farmers are insistent on demanding a full repeal of the laws.

Congress leader Rahul Gandhi tweeted his support for the protesters. “It’s simple. We are with the Satyagrahi Annadata,” he said.

Hundreds of thousands of farmers marched to the borders of Delhi on November 26, 2020 to demand the repeal of the Farmers’ Produce Trade and Commerce (Promotion and Facilitation) Act, the Farmers’ (Empowerment and Protection) Agreement on Price Assurance and Farm Services Act, and the Essential Commodities (Amendment) Act. While the Centre says the laws will provide more choice to farmers marketing their produce and bring private investment into the agricultural sector, the protesting farmers fear that the reforms will prevent them from receiving remunerative produce and will leave small farmers at the mercy of large corporates.

Eleven rounds of negotiations failed to break the impasse, and talks broke down on January 22, just days before a tractor parade in the capital on Republic Day ended in chaos and clashed with police. The Supreme Court has suspended implementation of the laws, and appointed a panel to discuss them with stakeholders. The panel’s report was submitted over three months ago.