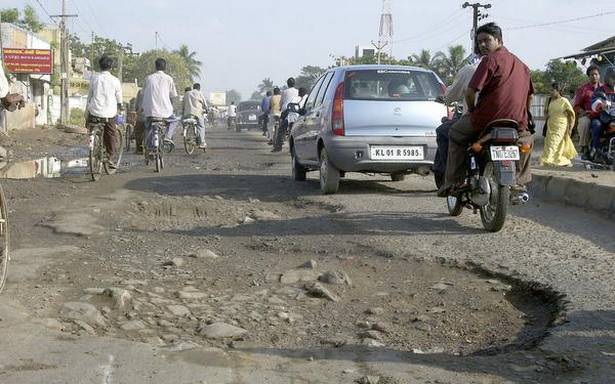 This chilling account of what was then the IT-corridor in the making is from the early 2000s.

The present Pallavaram-Thoraipakkam Radial Road takes the cake for terror, Prabhakaran points out.

“A rope would be tied across the road to trap those travelling late in the night. When I got delayed at work due to the late arrival of flights, I would avoid taking this road though it was a short-cut back home,” Prabhakaran reveals.

Roads in and around OMR managed scored poorly on safety and connectivity. During the monsoons, they disappeared without a trace in stagnant rainwater.

Despite the evident challenges, Vijay Shanthi’s Sri Jayendra Colony decided to brave it out. One of the first residential projects to come up on OMR, it came with more than 350 units spread across 15 blocks, and the promise of a new standard of living.

“Roads inside the colony were so broad that three cars could move side by side,” explains Prabhakaran, adding that residents chose to gloss over the state of roads outside.

“We knew the area had potential for immense growth and it was only a matter of time before it lived up to it. Besides, the city was getting congested and most flats would not fit into our budgets,” says Prabhakaran, who bought a flat at ₹870 per sq ft in 2001.

Residents reveal that OMR was seen as the poor cousin of East Coast Road which was gaining ground as a residential belt.

With the advent of TIDEL Park in the year 2000 and many software companies, the tide turned for OMR.

V. Balasubramanian, an owner of a flat in F Block, had no preconceived notions about OMR when he invested in this community. On a visit to Sathyabama College, he and his family chanced upon the community and fell for it.

“Even before we moved in, in 2002, the side roads leading to Perungudi had independent houses. You had shops selling an array of items including a multi-chain supermarket; and Nehru Nagar was a hub for small scale factories,” says Balasubramanian, who took voluntary retirement from AM Jain College, Meenambakkam.

Since they moved in, residents have been at the mercy of tanker lorries for water.

“Water was available at five to six feet but the TDS being high, we are dependent on tanker lorries,” says Balasubramanian.

In 1999-2000, Ramya Rani had the sense of being in an adventure when she drove to Professor Dhanapalan College of Arts and Science in Kelambakkam, where she was employed. The college operated a bus for the staff, as public transport was patchy and unreliable.

“When the college bus did not turn up or we missed the bus, we depended on public transport,” says Ramya, remembering how 21H and 19C were the prominent services.

Thanks to farm lands in the region, getting fresh produces of vegetables and fruits was never a challenge. Ramya illustrates: “For the kitchen in our college lab, we would procure watermelons at ₹2 each from nearby farms.”