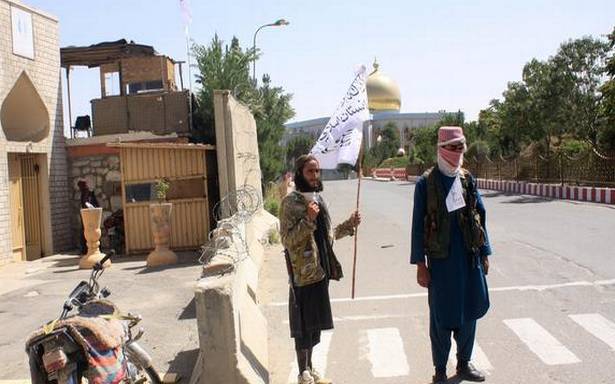 On Thursday, MEA spokesperson Arindam Bagchi had said there were “no plans” to evacuate staff from Kabul

Amidst moves by other countries to secure their diplomats based in Afghanistan, the government began a series of consultations on whether to scale down operations at the Embassy in Kabul. The meetings on Saturday in Delhi came amidst reports that the Taliban has taken territory around 50 kilometres from Kabul, while Afghanistan President Ashraf Ghani said he is discussing how to “remobilise” the Afghanistan National Defence and Security Forces (ANDSF) in order to protect the capital and other cities.

According to sources, security assessments had earlier been in favour of keeping the Indian Embassy in Kabul fully operational, after consulates in Kandahar and Mazar-e-Sharif were closed and Indian staff flown out. On Thursday, MEA spokesperson Arindam Bagchi had said there were “no plans” to evacuate staff from Kabul, the single remaining Indian mission that is operational in Afghanistan. Indian Ambassador Rudrendra Tandon is also in Kabul at present heading the mission, and officials have been keen not to send any “panic signals” that could compromise security as well.

However, as the Taliban has made advances on several provincial capitals in the past two days, U.S., U.K. and Canada have decided to move their Embassy staff out, and are sending supplementary security forces to Kabul to ensure a smooth exit. By Sunday evening the US will have flown in about 3,000 soldiers for the effort, while the U.K. is sending about 600 troops. According to news agency reports, European countries like Denmark, Norway and the Netherlands have decided to close their embassies, while others like Finland and Sweden are scaling back the presence of their diplomats. Germany and France have also begun to fly out their staff from Afghanistan, despite assurances from a Taliban spokesperson that the group would “not target embassies or diplomats”.

In addition U.S., U.K. and other embassies belonging to NATO countries are expected to relocate some skeletal staff to the Kabul airport compound, and maintain diplomatic outposts there even if the city is overrun. This will mean that the security personnel levels at the diplomatic “Green Zone” in Kabul would be considerably lower, an official said.

As a result, officials in the MEA, MHA and the National Security Council Secretariat are reviewing contingency plans in the event of a forcible takeover of Kabul by the Taliban, or if violent clashes break out in the capital.

The Indian embassy has also been flooded with visa requests from Afghan citizens, and families with links to India, which will need to be processed by Embassy staff, which is another factor in the decision process, said the officials.

Former Ambassador to Afghanistan Amar Sinha said that while the security of Indian personnel is of “paramount importance” it is also necessary to consider the timing of the decision carefully.

“There is a dilemma of any hasty decision which will be very debilitating in terms of the morale. Recent US intelligence reports providing timelines for the fall of Kabul have been a cause for panic already. There is also the consular angle and the need to meet the demand for visas for many friends of India. If time permits, we need to have a surge in this activity before bringing down our activity levels,” Mr. Sinha told The Hindu.