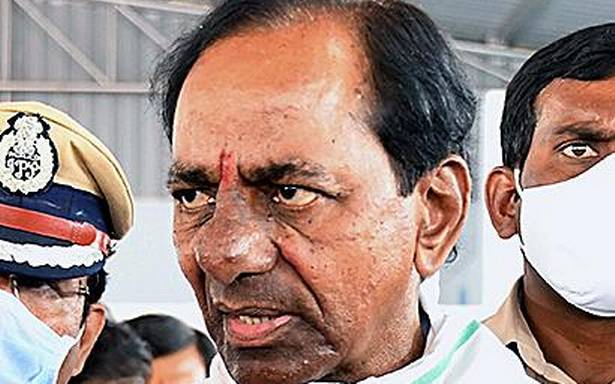 CM to lay foundation stone for 13 LI schemes in Nalgonda

Nagarjunasagar dam, one of the world’s largest masonry dams, and the lifeline river Krishna are located along their home side, but the people of Nagarjunasagar Assembly constituency are not its immediate beneficiaries.

The project, on the contrary , provides irrigation to more than six lakh acres in Nalgonda, Suryapet and Khammam districts, and Hyderabad, the State capital located 150 km away is transported this water. For Chief Minister K. Chandrasekhar Rao, the “injustice over the dam’s location” and neellu (water) as the principal right of the Telangana movement were one of the central themes of his State election speeches in December 2018 in undivided Nalgonda.

At his Nagarjunasagar Praja Ashirwada Sabha speech, he had assured the people a list of things, including sanction of Nellikal lift irrigation scheme to irrigate the ayacut’s unirrigable lands “the next morning the TRS government is re-elected, and the G.O. for a Degree College within 15 days.” But that ‘short time’ has come to an end only after its legislator Narsimhaiah passed away on December 1 due to illness, which also automatically mandates a by-election within six months.

In that same week, the Chief Minister had announced a government degree college for Haliya, the constituency’s business headquarters. And surprisingly, a never-before footfall of TRS leaders was witnessed in the constituency since, including re-launch of various schemes, celebration of festivals and official reviews and developmental plans.

On Wednesday, the Chief Minister, as announced earlier, will lay the foundation stone for 13 lift irrigation schemes at a proposed outlay of about ₹ 3,000 crore, at Haliya. The grand ceremony will be followed by a massive public meeting titled ‘Dhanyavadha Sabha’.

According to District Minister G. Jagadish Reddy, “KCR has sanctioned a series of lift schemes, is also aiming to complete the Dindi lift scheme and is ready with plans worth thousands of crores for development of Nalgonda. That’s why we want to thank him, on behalf of the people, and that’s why the ‘Dhanyavadha Sabha’.”

But for leaders from BJP, Communist Party of India (Marxist), Congress and the general public, the Chief Minister’s public visit to Nalgonda, the first since his promise “I will adopt Nalgonda” made in 2018, is only a harsh reminder of the many pending promises.

Nagarjunasagar’s Assembly by-election, going by the December-1 reference date, should be completed by May-end.