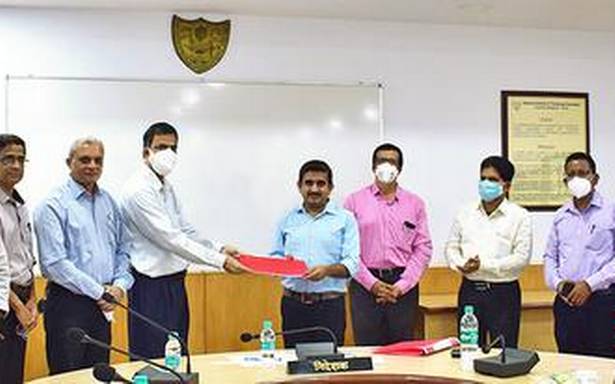 The National Institute of Technology – Karnataka (NIT-K), Surathkal transferred a technology to produce and preserve ready-to-cook and non-acrid edible aroids to a private company during the 62nd Foundation Day of the institute on Friday.

The technology transfer agreement was signed by Ananthanarayana, Deputy Director NIT-K, and Naveen G.V., founder of nGV Naturals on the occasion. The nGV Natural Industry Pvt. Ltd. which purchased the technology is in the business of packaging and selling vegetables in a ready to cook form in Bengaluru. It has established its business in processing and selling banana stems, tender jackfruit and bamboo shoots in the ready to cook form, a release from the NIT-K said.

The technology has been developed by Prasanna B. D., Associate Professor, Department of Chemical Engineering, and his team. The team filed for its Indian patent in this April. Using this technology, the acridity present in various edible corms of elephant foot yam (Amorphophallus paeoniifolius), taro (Colocasia esculanta var esculanta), tannia (Xanthosoma violaceum) and giant taro (Alocasia macrorrhiza) can be removed and they can be preserved for six months under ambient conditions.

Calcium oxalate crystals present in these corms are responsible for the acridity. Consumption of unprocessed aroid corms containing calcium oxalates causes caustic effects, irritation to the intestinal tract and absorptive poisoning and oxalosis. Total oxalates are removed traditionally by cooking, baking, frying or fermentation with additives like organic acids, baking soda etc. Although these strategies are successful in reducing oxalate content to some extent, colour/ flavour changes occur inevitably, the release added. Due to tedious steps involved in the preparation of these vegetables, most of the urban consumers are reluctant to use them. Using the technology developed by the NITK team, a ready-to-cook, non-acrid vegetable is prepared. Consumer can use the product like any other vegetable (carrot, potato etc.). Better consumer acceptance can boost up the demand, hence create a better and stable market for these tuber crops which in turn helps the farmers.