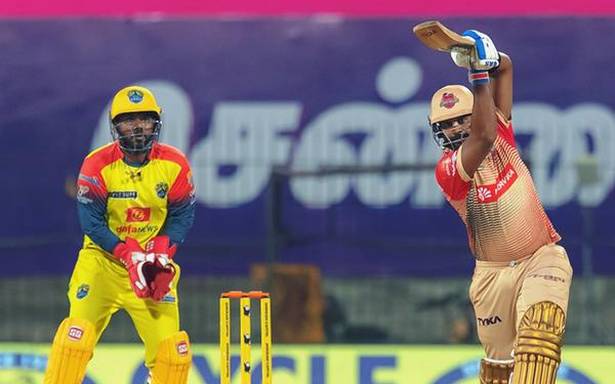 R. Sathish is young at 40. He flings himself full length, unmindful of injuries, to stop boundaries, scores game-changing direct hits, sends down useful seam, and still conjures hurricane innings such as his explosive 32-ball 64 after arriving at 44 for four at Chepauk on Friday.

And his throw from short third man caught the inform Sai Sudharsan short of the crease at the bowler’s end.

He was clearly the key man in Chepauk Super Gillies’ 36-run win over Lyca Kovai Kings in this TNPL match at the M.A. Chidambaram ground.

When Lyca chased, M. Siddharth produced an absolute beauty, something between an arm-ball and a left-armer’s inswinger from round the wicket, to castle R. Kavin.

Abhishek Tanwar clouted seamer Sonu Yadav for huge sixes but was involved in a verbal duel after the bowler dismissed him. Earlier, Tanwar had a skirmish with Kaushik Gandhi, who walked into him, after dismissing the batsman.

The night belonged to Sathish. Given width, he cut. His strong strong wrists came to the fore.

Sai Kishore chipped in with an innings of 31 and added 68 for the fifth wicket with the rampant Sathish.

The partnership took the game away from Lyca.