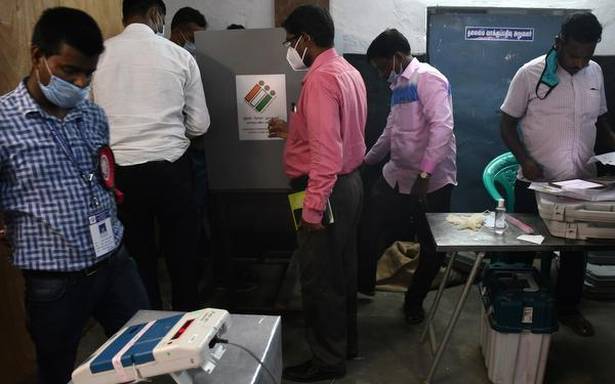 Royapuram registered the highest turnout among them with 57.66%

All the 16 Assembly constituencies of Chennai district registered a turnout of 59.4% at the completion of polling at 7 p.m. on Tuesday.

The inability of more than 350 officials to use the app to generate turnout data from many of the polling booths in the city led to a delay in compilation of data. The average turnout for all the 16 Assembly constituencies of Chennai District at 5 p.m. was 50.12%.

Royapuram (57.66%) registered the highest turnout by then. Since morning, polling in most of the booths in north Chennai was higher than that of other parts of the district. But many residents complained about the deletion of names from the rolls.

Dandapani, an elector of Chepauk Thiruvallikeni Assembly constituency, said his name was removed from the rolls without any valid reason. N.E. Ammanullah, a resident of Mannadi in Harbour constituency, said the names of a few members of the same household had been deleted.

Harbour constituency DMK candidate Sekar Babu alleged that the names of some members of the families belonging to a certain community were deleted from the electoral rolls. A protest was reported in Barathi Arts College, alleging that outsiders had been brought to vote in the constituency.

Owing to the arrangements made for COVID-19 patients to vote in the booth located at Chennai Corporation Girls Higher Secondary School on Buddha Street in Dr. Radhakrishnan Nagar, police advised electors to leave the premises in the evening. Some of the electors claimed that they were not allowed to get inside the booth owing to the arrangements made to accommodate COVID-19 patients.

The Chennai District Election Office received 10 complaints pertaining to the distribution of cash on Tuesday. Residents said polling was disrupted for some time in a polling booth in Chepauk-Thiruvallikeni Assembly constituency because of glitches in the EVM. Chennai District Election officials had created all women polling stations at Korukkupet, Erukkencheri, Choolai and Otteri.