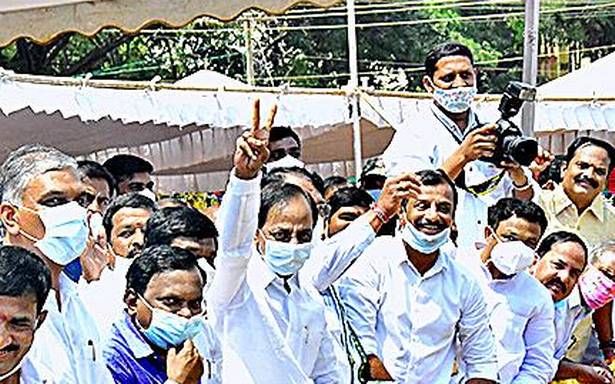 Farmers to get irrigation in summer

After offering special prayers and flowers to the Godavari, Chief Minister K. Chandrasekhar Rao released the river water into Haldi Vagu at Ousulapalli village in Wargal mandal of Siddipet district. Godavari water is being lifted from Kaleshwaram to Kondapochammasagar and for about half a kilometre on the way is Haldi feeder channel. The Chief Minister was accompanied by Assembly Speaker Pocharam Srinivas Reddy, Finance Minister T. Harish Rao, V. Prashanth Reddy among others.

Later, the Chief Minister has also released Goavari water to Gajwel canal as well at Pamulaparthi in Markook mandal. About 1,600 cusecs of water is being released to Haldi Vagu. This water will fill 32 check dams in both Siddipet and Medak districts on the way to Manjeera before reaching Nizamsagar. It would take about eight to 10 days for the water to reach Nizamsagar. About 0.62 tmcft water will be stored in check dams. Standing crop in about 14,268 acres will be saved with the release of Godavari water during summer.