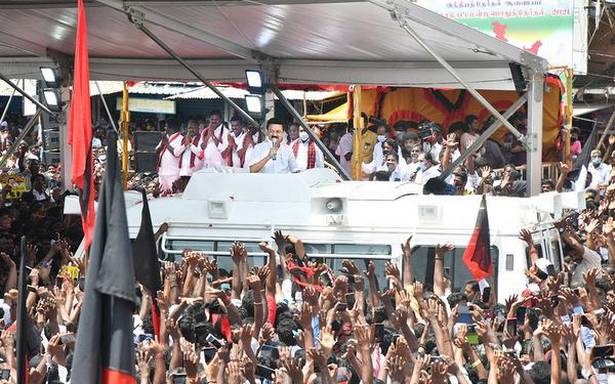 Vanniyar quota may have both positive and negative impact on AIADMK

DMK president M.K. Stalin last week denounced attempts to paint his party as anti-Hindu and said spirituality and politics were different for the Tamil people. He made these remarks while campaigning in Tiruvannamalai town, which welcomes lakhs of Hindu devotees to the ancient Arunachaleswarar Temple every month. The DMK is contesting in all eight seats — Tiruvannamalai, Kilpennathur, Chengam, Polur, Vandavasi, Kalasapakkam, Arani and Cheyyar — in the district.

He reiterated the DMK’s promises that his government would allot ₹1,000 crore for renovation of temples and provide funds to Hindu devotees for religious tourism.

DMK heavyweight E.V. Velu is contesting against BJP candidate Thanigaivel in the temple town. The other DMK candidates, including incumbents K. Pichandi, M.P. Giri, K.V. Sekaran and Ambethkumar, are pitted against AIADMK candidates in six seats and the PMK candidate in one seat. The AIADMK has fielded heavyweights such as Agri Krishnamurthy in Polur and Chevvoor Ramachandran in Arni.

This correspondent spoke to 40 people after visiting 6 villages under Tiruvannamalai, Chengam and Kalasapakkam and found certain themes being repeated. The 10.5% internal reservation for the Vanniyars within the Most Backward Class quota is likely to have both positive and negative impact on the ruling party.

The overall narrative was that a sizeable number of Vanniyar voters in the DMK and the Congress may consider voting for the AIADMK, while a majority of the non-Vanniyars and Scheduled Caste voters loyal to the AIADMK are likely to switch over to the other side. Many say the PMK’s assertive stance over the last decade has resulted in a pattern of other communities voting against the alliance that includes the PMK and this view has become sharper with the announcement of the reservation.

On the same street, another family loyal to the Congress says it will vote for the DMK. However, the son says he will vote for the Naam Tamilar Katchi. People in the Dalit neighbourhood say they will back the DMK because of the presence of the PMK and the BJP in the AIADMK-led alliance. A middle-aged AIADMK loyalist says, “If the two leaves [the AIADMK symbol] contests in my constituency, I will still vote for them. But I will not vote for ‘Thamarai’ [the BJP’s lotus symbol].”

A DMK functionary belonging to the Vanniyar community in a village in Chengam says they are trying to present a counter-argument: this reservation is not good for the community as it has reduced the community’s representation to just 10.5% when they are competing for the entire 20%. He says they are also propagating a video-graphed speech of Minister R.B. Udhayakumar in which he claims the announcement is ‘eyewash’ and it will be valid for only 6 months. “The educated and caste-conscious Vanniyars in the DMK who understand the importance of reservation may change their mind. Also, the DMK’s promise to incentivise inter-caste marriages has not gone down well with the community,” he says.

At Pudhupet in Chengam, this theme became clearer. A Vanniyar who has traditionally voted for the AIADMK says he will back the party for the reservation. A non-Vanniyar AIADMK voter says, “It is natural that non-Vanniyar communities will feel that they are not being cared for. How can I vote for them?”

The minorities are backing the DMK-led alliance.

Local workers say that while these broad narratives are true across the northern districts, local rivalries will play an important role. “In Arani, for example, the DMK candidate is considered a humble person. Here, the Vanniyar organisations are tacitly working for him against Sevvor Ramachandran, who is from another community. So cross-voting will change the contest. The PMK candidates have also realised that the other communities are likely to vote against them. Hence, they are hesitant to talk about the reservation,” says a Tamil magazine reporter.

The workers of political parties and smaller organisations say the AIADMK has a fighting chance in Polur and Kalasapakkam, while the DMK is likely to win 6 seats.