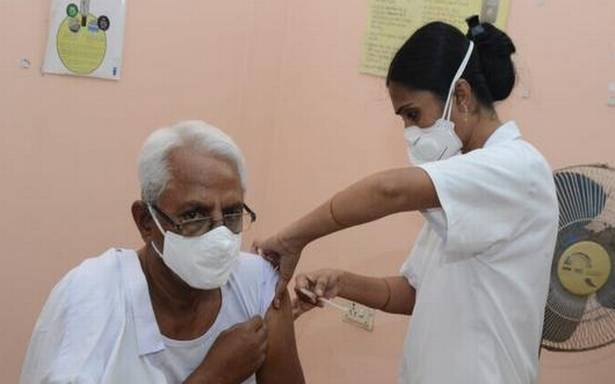 It was a hectic day for health workers who scrambled to administer the COVID vaccine in the remote villages of Prakasam and Nellore districts to break the chain as more than 100 persons tested positive in the South Coastal Andhra Pradesh in a span of 24 hours.

Worried over the spurt in cases, the health personnel fanned out to 176 Public Health centres in the two districts to provide vaccine to all eligible persons at the grassroots level on a saturation basis.

Overseeing the vaccination drive being taken up at 90 session sites, Prakasam District Medical and Health Officer P. Ratnavalli said from Monday, the drive would be undertaken in one ward each in all urban local bodies. As many as 4,702 persons were vaccinated in SPSR Nellore district and another 1,945 persons in Prakasam district by the evening.

The Prakasam police are cracking the whip to ensure COVID-appropriate behaviour among motorists as complacency had set in when the incidence of the viral disease was on the decline. Over 3,000 cases were registered across the district against those not wearing face masks. After collecting more than ₹ 3.06 lakh as fine, the personnel distributed face masks to motorists.