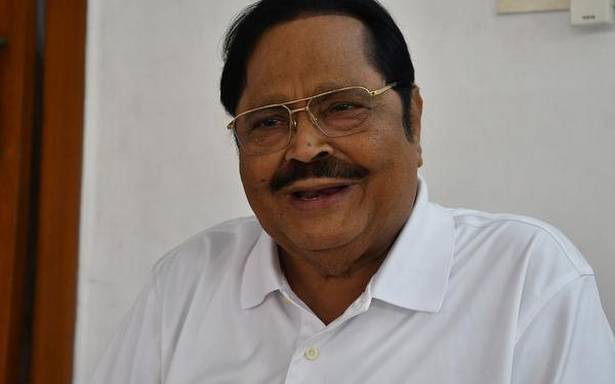 Since 1971, DMK general secretary Duraimurugan has contested from Katapadi for nine times in the Assembly elections. The 83-year-old veteran seeks re-election for the tenth time in the April 6 election. He appeared confident of victory and seemed relaxed when The Hindu met him at his house at Gandhi Nagar, Katpadi. Dressed in his trademark white T-shirt and dhoti, he spoke about how ideas of politics and politicians have changed and what he plans for the constituency.

From wall-posters to digital campaign, how do you see the change?

Now there are no wall-posters, it is a digital culture. Owing to the advances in technology, news can spread faster than the conventional media. Our messages are now reaching the youngsters easily, and they are spreading them everywhere.

You have been in politics for five decades. What changes do you see today?

Politics has become money-minded, and service to the public has taken a back seat. Purchasing votes through money power is not good for democracy. I started competing in elections in 1971. The difference between the election then and today is that now money is the motive and I don’t think service is given enough importance. Earlier, the public used to demand improvements to amenities, such as water, transport, infrastructure and education, and renovation of temples. They would be happy if we fulfilled their wishes and used to vote for us. Now people have begun asking us how much money a candidate will give them.

Who is to be blamed for this?

Politicians have mentally spoilt the people by giving money. I don’t like this trend. The affluent think that they can win in an election if they have money. They don’t bother about service. Some politicians are contesting from unfamiliar constituencies and not from their home towns. They try to purchase votes and I’m betting even if they win, they will not bother to visit the constituency again or promote the welfare of their voters. People should understand that those who purchase votes will not serve them.

This is the first Assembly election without your mentor and DMK patriarch M. Karunanidhi. What advice from him propels you still?

Thalaivar [Karunanidhi] used to ask us to serve without any expectation. Winning or not is secondary, service should come first.

How do you see the new generation of politicians? Especially after seeing stalwarts…

Politicians of my generation developed knowledge by learning from scratch. I came to politics, having been inspired by former Chief Minister C.N. Annadurai’s Dravida Nadu ideology. I researched other small nations that got freedom and how they were managing their affairs. Now, people are not coming to politics to pursue any ideology. On the first day of joining, they ask what post he/she would get. They don’t know about leaders or their ideology. Not knowing something is okay, but remaining ignorant of it is no good.

How do you strike a chord with the people in your constituency?

I don’t do any preparation and don’t campaign door to door. People gather around me and I become one among them. I speak their language, and this has helped me win hearts all these years.

What is the first thing that you will do for Katpadi if you win?

Every election, I promise something, and I have fulfilled it. I have brought Palar water to Katpadi. If I am not able to keep my promise, I explain the reason. This time, I have promised to set up a super-speciality hospital like AIIMS.

The second promise is to bring a SIPCOT [park] here on condition of giving jobs to local residents, too. I am confident of winning this election and fulfilling my promises.