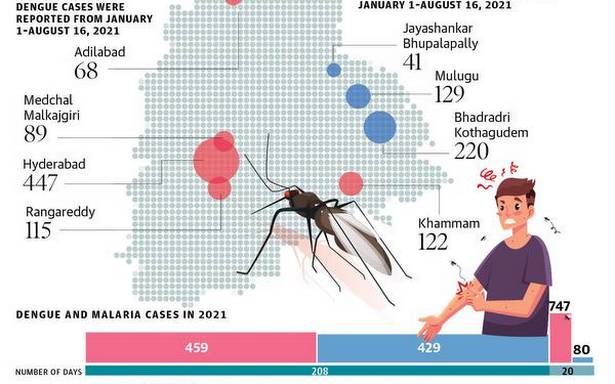 Rise in dengue and malaria cases in State

As dengue and malaria cases keep rising in Telangana, Health officials advise people to keep their surroundings clean and make sure water does not collect and stay stagnant anywhere.

Director of Public Health Dr. G. Srinivasa Rao said that more than 50% of dengue cases were reported in Greater Hyderabad Municipal Corporation (GHMC) that includes Hyderabad and some parts of Rangareddy and Medchal Malkajgiri.

In case of malaria, the highest of 220 cases were from Bhadradri Kothagudem, 129 from Mulugu, and 41 from Jayashankar Bhupalapally.

The DPH said that Chief Minister K. Chandrasekhar Rao had held review meetings on these seasonal diseases, and measures to contain them were being taken. However, he asked people to co-operate.

Stagnant water in empty containers, bottles, broken vessels, coconut shells, tyres, or other containers lying in and around houses, are breeding ground for mosquitoes. Some people keep plates under pots to grow plants. If water gets collected in these plates and are not cleared regularly, mosquitoes breed in it.

Since a lot of people are working from home, wearing full sleeve clothes to avoid mosquito bites are highly recommended.