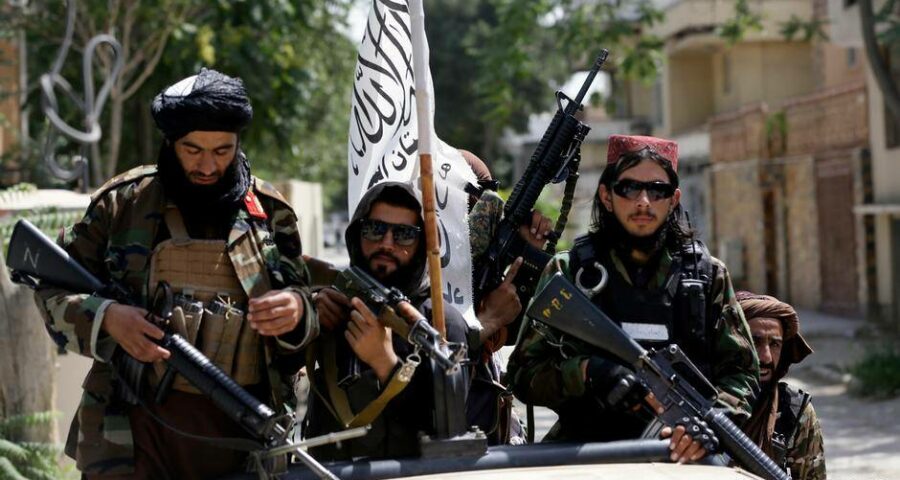 China, India, Iran and Pakistan have disparate interests in Afghanistan, and they are all now looking to forge good ties with the country's new rulers. The Chinese government has so far appeared to be at ease with the collapse of the Afghan government and the Taliban’s takeover of the country.

“The Chinese embassy in Afghanistan is continuing to operate as normal, and its ambassador and embassy staff will remain in their posts,” Foreign Ministry spokesperson Hua Chunying said on Monday.

Most Chinese citizens in Afghanistan had earlier returned to China, but the ones who remained behind are in close contact with the embassy, reported the South China Morning Post newspaper.

The spokesperson also stressed Beijing’s well-established contacts with the Taliban, underlining that the insurgents expressed a desire for good ties with China.

“Afghanistan’s Taliban has expressed many times a desire for good relations with China, with an expectation that China will take part in Afghanistan’s rebuilding and development process, and will not allow any forces to use Afghanistan’s soil to harm China,” she said. “We welcome this.”

No Taliban support for Uyghur separatists?

The Chinese leadership is particularly concerned about Afghanistan emerging once again as a safe haven for Islamic terrorists. In the past, say experts, the country hosted Uyghur separatist forces of the so-called East Turkestan Islamic Movement (ETIM), which aimed to establish an independent state called East Turkestan replacing China’s western Xinjiang province.

“It is clear that there have been Turkistan Islamic Party fighters in Afghanistan,” Andrew Small, a foreign policy expert at the German Marshall Fund of the United States, told DW. “There is a serious counterterrorism concern that China has in Afghanistan,” he added.

Small believes the Taliban’s ambiguous attitude toward Uyghur extremists from Xinjiang, whom Beijing blames for a series of deadly attacks, is likely to create tensions between Beijing and the incoming Afghan government.

“The question is whether the Taliban now is the same Taliban from 20 years ago, when they were in government,” he said. “The group has such deep-rooted and complex ties with extremist and terrorist groups that it is too early to tell how worried China should be.”

While the Taliban had expressed a desire to build good relations with China at the recent meeting between the group’s representatives and Chinese officials, Small warned that “their attitude and promises can also change.”

India finds itself in a tough spot

India evacuated its entire diplomatic staff in Afghanistan, comprising over 190 personnel, from Kabul on Tuesday. The dramatic events over the past few days and the seizure of power by the Taliban have put Indian Prime Minister Narendra Modi’s government in a bind, as New Delhi has maintained a consistent anti-Taliban policy for decades.

PM Modi chaired a meeting of the cabinet committee on security to discuss the way forward with regard to India’s engagement with a Taliban-led Afghanistan.

“We will keep an open mind, wait and watch what the Taliban actually do during and after the transitional process. We will also assess how inclusive they are in accommodating the gains of the last 20 years,” a senior government official told DW.

Some observers warn that India’s investments in Afghanistan are in jeopardy after the Taliban takeover.

Over the past two decades, India has invested around $3 billion ($2.6 billion) in Afghanistan’s infrastructure, including over 400 projects across all provinces in the country.

“Having pledged $3 billion and supported the Afghan government for the last two decades, New Delhi is caught between the devil and deep blue sea. The developmental assistance is in serious danger of reversal,” Shanthie Mariet D’Souza, a foreign policy expert at the Kautilya School of Public Policy in Hyderabad, told DW.

D’Souza, who has spent more than a decade working in the governmental and non-governmental sectors in various provinces of Afghanistan, believes New Delhi has to come up with a pragmatic and astute policy to engage with the Taliban.

That’s needed to ensure continuation of its present development assistance for the Afghans to preserve the gains made and prevent a humanitarian crisis, she said.

A Taliban-led Afghanistan also poses security challenges for New Delhi. For years, anti-India militant groups like Lashkar-e-Taiba and Jaish-e-Mohammad have been operating from their bases and training camps in Afghanistan-Pakistan border region to launch attacks against targets in India.

With the Taliban controlling Afghanistan now, these militant outfits could be further emboldened and have access to greater territory to carry out their operations.

“Strategically, it will depend on how the Taliban’s relationship with Pakistan and China evolves, and if the group supports Islamabad’s proxy warfare in Kashmir,” Navnita Behera from the University of Delhi told DW.

A pyrrhic victory for Pakistan?

Pakistan, or more precisely the Pakistani military establishment, has supported the Afghan Taliban for decades, not least to gain “strategic depth” in Islamabad’s conflict with India.

Now that the Taliban have taken over Afghanistan, does it mean good news for Pakistan? Not entirely, say observers like Madiha Afzal, a South Asia expert at the Brookings Institution.

“Pakistan will face security concerns with a Taliban-ruled Afghanistan, chiefly from an emboldened and resurgent Tehrik-e-Taliban Pakistan (TTP), a terrorist group responsible for killing tens of thousands of Pakistanis,” Afzal told DW.

The developments in Afghanistan may also give a boost to other fundamentalist groups within Pakistan, “in a way that renders them more powerful than before and threaten the state’s authority,” the expert said.

“I think Pakistan will have less clout over the Taliban now than it did in the 1996-2001 timeframe,” Afzal noted, pointing out that the militant group has gained international legitimacy since it struck a deal with the US in Doha and therefore needs Pakistan less now than before.

Claude Rakisits, professor of international relations at the Australian National University, says that Islamabad mainly wants one thing from its future relationship with the new leadership in Kabul: protection from cross-border terrorist attacks launched from TTP safe havens on Afghan soil.

“Basically, Islamabad wants a relationship with Kabul which enables it to stop worrying about its western border and potential terrorist attacks launched from safe havens in Afghanistan,” said Rakisits.

Also, Islamabad wants Kabul to join the multibillion-dollar China-Pakistan Economic Corridor (CPEC) project, he noted. “Pakistan would very much like to see Afghanistan join up with CPEC and be integrated with China’s Belt and Road Initiative.”

This, in turn, will depend on how ties between the Taliban and Beijing unfold.

About recognizing the Taliban government in Afghanistan, Pakistan’s Federal Minister for Information Fawad Chaudhry said any recognition of the Taliban administration will be a “regional decision” taken after consultations with regional and international powers.

“We are in contact with our friends globally and regionally and we will decide after consulting them.”

The Iranian leadership appears to have mixed feelings about the recent developments in the neighboring country. On the one hand, Tehran is happy to see US forces leave its neighborhood. But on the other hand, it’s concerned about security and stability in Afghanistan.

At present, around 750,000 Afghan refugees are officially registered in Iran. Up to two million more Afghans live illegally in the country, and now thousands more are fleeing the Taliban.

Iran, which shares a 950-kilometer-long (590 miles) border with Afghanistan, is worried about a new wave of Afghan refugees and asylum-seekers flooding the country.

Iranian authorities say they have set up three reception facilities along the border.

“As soon as the current situation stabilizes, refugees and asylum-seekers will be able to return to their homes from there,” government spokesman Hossein Kasemi said.

Furthermore, Iran and the Taliban haven’t always shared cordial ties. Despite years of bilateral talks between Iran’s Shiite government and representatives of the Sunni Taliban, the Islamists are hated in Iran.

In 1998, Iran almost launched a military campaign against the Taliban. The Taliban had previously killed eight Iranian diplomats and a correspondent of the official news agency IRNA at the Iranian Consulate in the northern Afghan city of Mazar-i Sharif. The day of his assassination, August 8, is still marked as “Journalists’ Day” in Iran.