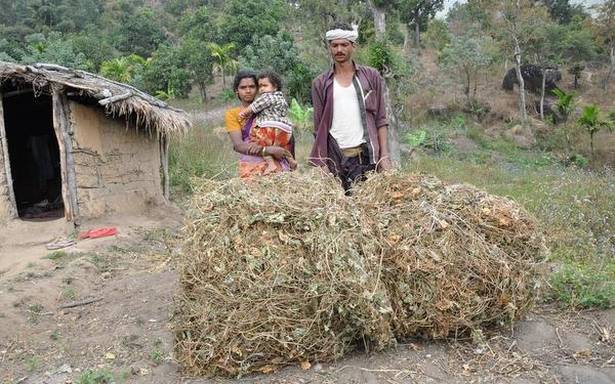 The tribespeople of the Marayur forest settlements are faced with a crisis of finding a market for kattupadavalam (snake gourd), which they have cultivated extensively under the initiative of Vana Samrakshana Samithi (VSS), providing them a key source of livelihood.

Kattupadavalam, a variety of Trichosanthes cucumerina, had earlier enjoyed good demand from ayurvedic pharmaceutical companies that purchased the herb in large quantities. It is harvested from January to April and farmers collect the entire plant, including the roots, leaves, vine and seeds, which are dried before being sold. The vegetable used to fetch above ₹200 per kg.

However, last year, many companies had informed the VSS of their inability to buy kattupadavalam in the following season due to the COVID-19 pandemic. Despite the notification, many farmers had gone ahead with the cultivation. According to the VSS, about 10 tonnes of kattupadavalam harvested is seeking market now.

The cultivation had been carried out in nearly 10 tribal settlements in the Marayur sandalwood division. A Forest Department official said that a major attraction for farmers in cultivating kattupadavalam was that the vegetable is generally free of attack from wild animals due to its bitter taste.

Earlier, the farmers collected the herb from the forests and sold to middlemen at a paltry sum of ₹25 a kg. Later, the intervention of the Forest Department led to the pharmaceutical companies directly procuring it.

The main tribal settlements where snake gourd is cultivated include Karpoorakudy, Kuthukallukudy, Nellipettykudy, Kavakudy and Vengaparakudy. Deemed a key ingredient in ayurveda medicines, the variety grown in Marayur is considered to be of better quality.

Now, almost five tonnes of it has been sold at ₹195 per kg. VSS sources pointed out that since the herb enjoys demand only from pharmaceutical companies, finding another market for the produce is not so easy.

K.V. Binoji, facilitator of the Marayur sandalwood division, said that only Kottakkal Arya Vaidya Sala had placed orders for its procurement this season. Earlier, a few other ayurveda companies such as Oushadhi and Ambuja had come in search of the herb. The production too dropped from 47 tonnes to nearly 15 tonnes. Efforts are on to find a market for the unsold produce, he added.