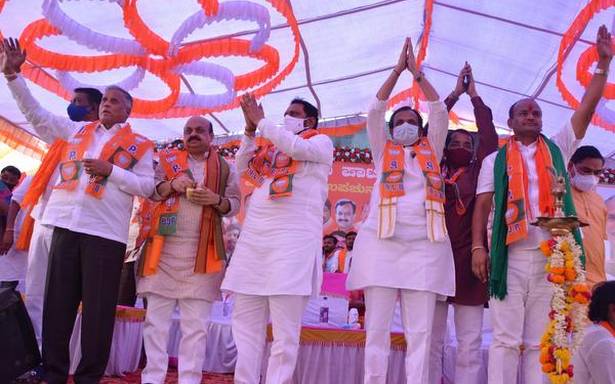 After their efforts in their personal meetings failed to douse the rebellion posed by Mallikarjun Khuba, a BJP ticket aspirant for Basavakalyan byelection and who had been denied party ticket, the party leaders resorted to an appeal to Mr. Mallikarjun Khuba at a public meeting asking him to step down from contesting the bypolls as an Independent candidate and instead work for the victory of the party’s official candidate Sharanu Salagar.

In a public meeting held at Shantiniketan Grounds in Basavakalyan before Mr. Salagar filed his nomination papers on Tuesday, Deputy Chief Minister Laxman Savadi, Home Minister Basavaraj Bommai, Housing Minister V. Somanna, Animal Husbandry Minister Prabhu Chauhan and Lok Sabha member from Bidar Bhagwanth Khuba initially assured Mr. Mallikarjun Khuba of a good position in the party and political future in return for his withdrawal from the contest and, later, verbally attacked him for being irresponsive to people’s problems, clearly indicating the party’s offensive position, if he failed to withdraw from the contest.

“If he [Mallikarjun Khuba] files his nomination papers as an Independent candidate, let us convince him of the need for him to withdraw from contest. If he doesn’t, let us fight him… the BJP is not a party that sells its election ticket for money. It gives ticket only to those party workers who honestly work for the party expecting nothing in return. Mr. Salagar has been chosen as the party’s candidate for Basavakalyan only because he has been working for the welfare of the constituency’s people. When people in the constituency were in distress twice in the recent past, during the COVID-19 lockdown and floods, it was Mr. Salagar who stood with the people helping them. The person who is upset with the denial of ticket was in Delhi,” Mr. Savadi said without taking the name of Mr. Mallikarjun Khuba.

Lok Sabha member from Bidar Bhagwanth Khuba said that only those who could make space in the hearts of people would get an opportunity to contest elections on BJP ticket.

“Mr. Savadi got a survey done in Basavakalyan constituency and Mr. Salagar emerged the most eligible candidate to get BJP ticket. When Mr. Mallikarjun Khuba came to me requesting ticket, I clearly told him that his work for the people, not my influence, would matter. He was naturally disappointed when he was denied ticket. He should realise that the party never deserts any honest worker. I appeal to him to join the party ranks to work for the victory of Mr. Salagar,” Mr. Bhagwanth Khuba said.

Taking exceptions to the projection of Mr. Salagar as an outsider by BJP ticket aspirants who were denied ticket, Mr. Bommai said that most of the Sharanas of 12th Century, including Basaveshwara, had arrived from different places of the State and country to make Basavakalyan as their place of work.

“After testing many parties, you [Mr. Mallikarjun Khuba] came to a mainstream party [the BJP]. Don’t deviate from it to spoil your political career. You have a bright future in the BJP… the Congress is a sinking ship. Its leaders preach Basaveshwara’s ideology only in words and not in deeds. It is the B.S. Yediyurappa government that has sanctioned ₹500 crore to build a New Anubhava Mantapa. The Congress only announced the project, but did not start its construction,” Mr. Bommai said.

Exuding the confidence of his victory, Mr. Salagar declared that after May 2, the date of election results, there would be no gambling or rowdyism in Basavakalyan. “I am the BJP candidate for Basavakalyan because the party has chosen me to serve you all,” he said.