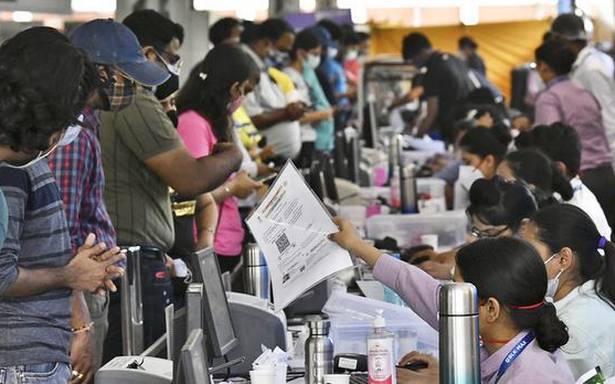 As supplies dwindle, schools and NGOs too are collaborating in the endeavour

With a limited supply of vaccines at government facilities over the past week, several resident welfare associations, academic institutions and hospitals have come together to organise vaccination camps in a localised manner.

A vaccination drive has been organised by Fortis Hospital, Shalimar Bagh at Mount Abu School from June 1 for the 18+ category. While prior registration is required on the government portal, each dose of Covishield was administered for ₹1,050.

Jyoti Arora, principal of Mount Abu School, said: “We were probably the first private school to have collaborated for such a drive. We provided the required infrastructure, which included space for registration kiosk, waiting areas and observation areas. The campus is being sanitised daily. The vaccination drive continued in a full-fledged manner for three days and 250 people were vaccinated.”

A vaccination camp was set up by a city-based NGO in collaboration with Fortis Escorts Hospital for residents of Malviya Nagar, Safdarjung Development Area and Green Park. Around 1,000 people were vaccinated between May 29 and June 2, officials involved in the organisation of the camp said. “The camp was organised based on requests of the RWAs as there were several people who could not get the jabs due to the paucity of vaccines,” an official said.

“Apollo Hospitals is administering Covishield at the drive-through facility between 9 a.m. to 4 p.m. and is open to everyone above 18 years. People need to be registered on the Cowin app. A total of 150 people were vaccinated on the first day,” read an official statement from the hospital.

The drive-through vaccination drive at the Chhatrasal Stadium, organised by the North district administration, saw a steady stream of visitors in cars, two-wheelers and even e-rickshaws, visit the centre for vaccination.

Over 550 doses have already been administered at the centre, said Kusum Arora, who is in charge of the facility. While vaccines are being currently administered to only the 45-plus category, Dr. Arora said the facility will be open for those above 18 over the coming days.

“Two parallel sessions are being run between 9 a.m. and 5 p.m. at the stadium. This has been done to avoid overcrowding and reduce waiting time. While people with online registrations are welcome, there is a facility for spot registration as well. The staffers are fully trained and Covishield is being administered at the centre,” said Dr. Arora.

Ajay Chauhan (51), who arrived at the centre to get vaccinated, said: “I am not too savvy with technology and hence had been struggling to register myself on the portal. However, the facility at the stadium came as a big relief. I could get myself registered at the first counter. Getting the jab was also a swift process, after which I had to wait in the observation area for half an hour. Overall, it was a relief to experience a smooth process.”