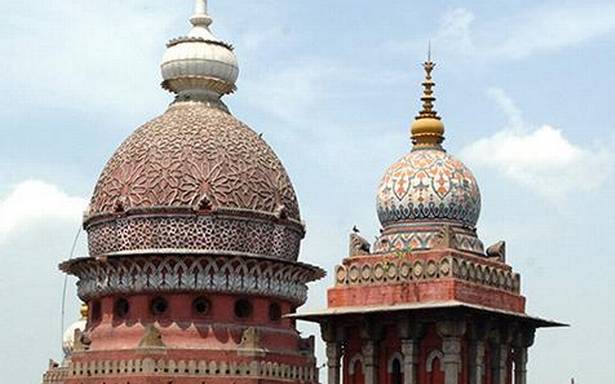 It was filed against former Registrar (Vigilance)

A police inquiry ordered by the Madras High Court has revealed the “active” involvement of a serving judicial officer and the passive involvement of a few advocates and others in filing a writ of quo warranto petition last year, accusing the then Registrar (Vigilance) R. Poornima of not having passed even Class XII and getting it published in newspapers, even before the case could be listed for admission.

The judges, however, refused to make the report public for now.

The Division Bench also held that the police inquiry had led to the unearthing of sufficient material to frame charges against two advocates B. Sathish Kumar, 37, and U. Vasudevan, 53, of Chennai, under the Contempt of Courts Act of 1971.

The judges, on Friday, asked both the lawyers, who appeared virtually, if they wanted to plead guilty of the charges framed against them.

When both the advocates pleaded not guilty, the judges recorded their submissions and granted them time till June 18 to file additional affidavits in support of their defence. The court also directed the High Court Registry to forward their order, framing charges, to the counsel for the two advocates through e-mail. The court also said the involvement of the judicial officer had come to light only because of special powers conferred on the police.

Authoring the order, Justice Prakash wrote: “This court had to clothe Ms. Nagajothi IPS. with the powers under Chapter XII of the Code of Criminal Procedure, save the power to arrest, in order to protect the judiciary from crumbling like a pack of cards, inasmuch as, we, prima facie, found that Sathish Kumar and Vasudevan were not alone in their destructive adventure but had patrons within the judicial system.”

“If the judicial system falls, one pillar of the democracy falls with it and therefore, extraordinary situations call for extraordinary remedies. Having found something seriously amiss, the High Court cannot afford to throw up its hands and plead inability to bring the culprits to justice. If not for the powers given to Ms. Nagajothi, it would have been nigh impossible for her to effect seizures of materials from various places which disclose the connivance of some persons within the walls of judiciary,” he wrote.

The court also said that filing of the false case against the then Registrar (Vigilance), who had been taking stringent action against complaints of corruption against the judicial officers and getting it widely publicised in the media, demands invocation of the charge of scandalising the High Court and thereby bringing the administration of justice into disrepute in the eyes of the public.

It also amounted to interfering with the administration of justice, the other charge read.

On October 12, 2020, the then Chief Justice Amreshwar Pratap Sahi and Justice Senthilkumar Ramamoorthy had dismissed the writ petition filed against Ms. Poornima, and initiated suo motu contempt of proceedings against the petitioner, Mr. Sathish Kumar, besides imposing a cost of ₹5 lakh on him. Subsequently, the court came to know of the involvement of Vasudevan too and hence a Bench led by Justice Prakash had ordered a police inquiry on March 10, 2021.