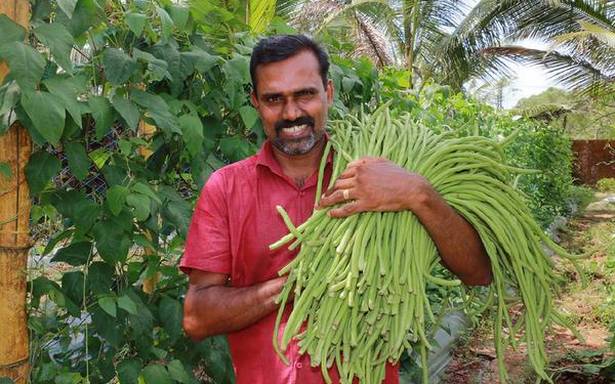 P.S. Sanumon from Kanjikuzhy in Alappuzha quit his unremunerative job in the coir industry and turned to agriculture to make a living.

"I was finding it hard to make ends meet and it was rather an easy decision for me to leave the job in the coir factory. I had a strong desire to become a farmer and threw myself into farming. Twenty years have passed and I am enjoying the simple joys of farming," says Mr. Sanumon.

Mr. Sanumon, 45, started farming on 1.5 acres of land in his possession. After finding success, he expanded vegetable cultivation by leasing another 4.5 acres. He practises both traditional and hi-tech precision farming in equal measure. His farm, on an average, produces 200 kg of vegetables on alternate days. “It has been a gradual but steady journey so far. From my experience, I can say that agriculture is remunerative. We should adopt modern technologies and diversify. The hi-tech precision farm is helping me to grow vegetables round the year,” he says.

Mr. Sanumon also runs an outlet at Thiruvizha, which sells vegetables from his farm and those from other farmers in the region. Apart from vegetables, he cultivates paddy in two acres and indulges in fish, poultry, and dairy farming.