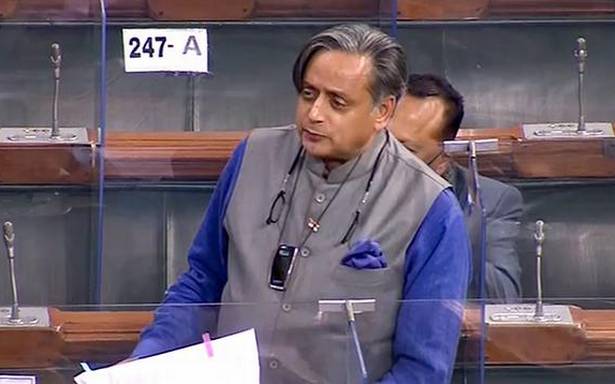 They deserve to be able to do their job safely without harassment, says Tharoor

Congress MP Shashi Tharoor on Friday raised a red flag over the continued incarceration of journalists Fahad Shah, Sajjad Gul and Siddique Kappan, and said it was “a blot on our conscience.”

Speaking during Zero Hour, he said several organisations like Reporters Without Borders and the Editors Guild of India had already pointed this out as part of a larger pattern of “deteriorating” press freedom in India. “India is ranked at 147 in the Press Freedom Index, and another organisation has named India as among the five most dangerous places for journalists,” he said. “Journalists in Kashmir, or U.P., or anywhere in India, deserve to be able to do their job safely without fear or harassment. The Supreme Court has also recognised the role of dissent in a vibrant democracy,” he said. He urged Home Minister Amit Shah to facilitate the release of Fahad Shah, Sajjad Gul and Siddique Kappan in the interest of freedom of the press in the country.

Bahujan Samaj Party (BSP) MP Kunwar Danish Ali raised the issue of universities, especially Jamia Millia Islamia and Aligarh Muslim University (AMU), that had remained closed for the better part of two years. “I am speaking specifically of these two universities as I, through the medium of Lok Sabha, am part of their court. I must state here that I fear that this generation of students will get left far behind if educational institutions are not opened,” he said. He also raised concerns over the process of filling the vacancies of the court of AMU.

Pradyut Bordoloi of the Congress said that the Assam police had been behind extra judicial killings. Nearly 90 had been killed since May 2021. There should be a judicial enquiry and all the culprits should be brought to justice. “There are some Ministers and Chief Ministers and people who hold constitutional posts who might be influenced by western cowboy films of shooting from the hip,” he said.

Another MP from Assam, Rajdeep Roy of the BJP, alleged that Mizoram police was involved in covering up a case of murder of a driver of an oil tanker, Praveen Singh, while he was returning from Aizawl. The Mizoram police, he said, arrested the wrong person, the brother of the deceased Nipen Singh, in connection with the case, tortured him and did not provide legal help either. “Now the news has come that Nipen Singh has died allegedly by suicide in an Aizawl jail. I want to request the Home Minister to order a CBI enquiry look into the case,” he said.