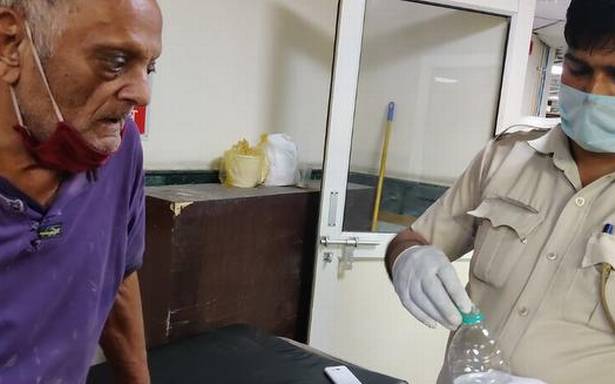 An octagenarian former bureaucrat, struggling with poor health and a suspected COVID-19 infection and living alone in Delhi, found Delhi Police as caregivers when he had given up all hopes of making it.

The Rajinder Nagar resident, who served as an under secretary in the MHA, can’t thank Delhi Police enough for giving him hope and care when he most needed it. His family members, living in different parts of the country, are also relieved now.

On Sunday afternoon a call was received at Rajinder Nagar police station regarding an elderly man who had developed COVID symptoms and was living alone in the area. The caller was his daughter who lives in Kalkaji area of South Delhi but she avoided visiting to her father as she feared getting infected.

The call was transferred to beat constable Raju Ram, who swiftly acted and reached the flat located on the third floor of a house in New Rajinder Nagar. He found Mr Murlidharan, 80, lying on the bed and coughing.

Mr Ram said that he immediately informed his senior about the situation and called an ambulance. He shifted him to RML hospital and stayed with him till all his tests were completed.

“Doctors did the RT-PCR test and chest scan. There was infection in his chest while the Covid test report will come on Monday evening. When I was shifting him to the ambulance, I found he had mentioned on a wall of his room that after his death, police should cremate him. I don’t know the reason,” said Mr. Ram.

He said that he remained in the hospital with the patient for a couple of hours and left only after exchanging his mobile number with the ward to inform him in case of any emergency. He got a call from his daughter enquiring about her father’s health.

“Mr Murlidharan’s daughter informed that her father retired as under secretary from Ministry of Home Affairs. She lives in Kalkaji with her mother while her two sisters live in Dubai, and Ajmer in Rajasthan,” said Mr Ram.

Mr Ram joined Delhi police in 2010 as a constable and he is now posted in Rajinder Nagar police station. He lives with his wife, mother and two daughters.