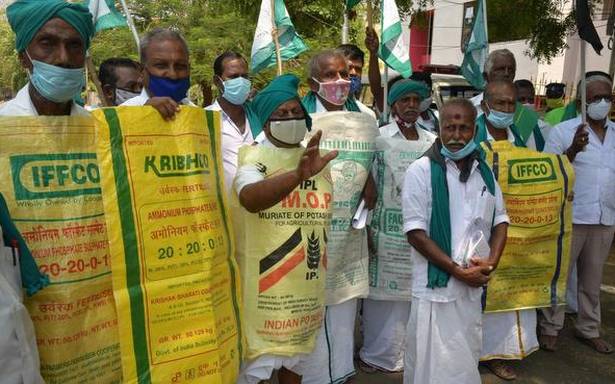 Farmers representatives continued to register their strong protest against the ‘steep hike’ in fertilizer prices. While a delegation of farmers chose to petition the district authorities to convey their displeasure to the Centre, another group resorted to a protest in the city on Monday.

The country’s largest fertiliser producer IFFCO recently revised rates for a 50 kilogram bag of Di-Ammonium Phosphate or DAP to ₹1,900 from ₹1,200, citing a surge in prices of raw materials, and other companies followed suit. Prices of other complex fertilisers were raised by 46% to 51.9%. Although, the Centre announced that price revision has been put on hold for now, farmers organisations dismiss it as an ‘eye wash’.

“The hike is too steep. The government should fix the price of fertilizers as earlier (prior to decontrol of fertilizer prices),” said R. Raja Chidambaram, State Secretary, Tamizhaga Vivasayigal Sangam, who led the delegation to present a petition to the Collector. To highlight their plight, the farmers representatives hung empty fertilizers bags on their shoulders.

The revision of prices two or three times a year not only affects farmers but also gives room for irregularities, Mr. Chidambaram contended.

Earlier, the Desiya Thennindhiya Nadhigal Inaippu Vivasayigal Sangam president P. Ayyakannu along with 44 of his outfit members was arrested after they staged a road roko on the Karur By Pass Road demanding the withdrawal of the hike in fertiliser prices.

Mr. Ayyakannu who had planned to go to New Delhi to stage a demonstration in support of this demand was advised by the police personnel on Sunday evening to desist from going to the national capital in view of the spike in COVID-19 cases and due to the lockdown currently in place in the State. The police had served him a memo not to indulge in any agitation during the pandemic period, said police sources.

However, Mr. Ayyakannu along with his outfit members came in a procession from his house and resorted to a road roko on Monday morning on the Karur By Pass road for about 15 minutes in support of the demand when the police personnel arrested all of them. Among those arrested included two women. Those arrested were lodged in a wedding hall. A case has been registered against Ayyakannu and the outfit members by the Woraiyur police following their arrest, the sources added.