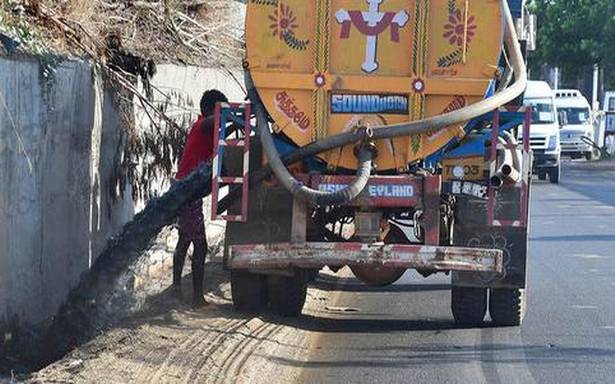 City waterways and the open stormwater drains along service lanes of arterial roads continue to be easy locations for private lorries to dispose of untreated sewage collected from neighbouring areas.

Residents of various areas complained that lorries that collect sewage from areas that are yet to be provided with underground drainage network find it convenient to dump it to avoid charges to be paid at the Metrowater facilities.

P. Suresh Kumar, a resident of Sholinganallur, said, “The stretch of south Buckingham Canal near the Iskcon temple service road is vulnerable to such pollution. I often see private lorries draining raw sewage and polluting the waterway during the early morning hours. I have also raised a complaint with the Greater Chennai Corporation and the complaint has been forwarded to the Semmencheri police station to take action against the operators.”

Sholinganallur is one of the areas awaiting sewerage connection. Though Metrowater has set up decanting points at sewage treatment plants in Sholinganallur and Perungudi, some tanker operators avoid them citing various reasons, including distance. Similarly, tankers dumping sewage in stormwater drains along service lanes of Chennai Bypass Road near Mogappair is a problem still waiting to be addressed.

Balaji Srinivas, a resident of Mogappair West, said: “I have seen four-five lorries dumping sewage into the stormwater drain that flows into the Cooum. The increase in this illegal practice poses a health hazard, and can cause groundwater pollution. Several complaints have been made to the authorities concerned in various departments, including the police.”

S. Swaminathan, secretary of the JAMBA United Welfare Association (a federation of residents’ welfare association of Mogappair), said measures must be taken to close the stormwater drains in the remaining stretch between Mogappair and Maduravoyal. More police patrolling would help reduce such problems. Officials of Metrowater said nearly 35 lorries dispose of sewage at the Golden George Nagar sewage pumping station on a nominal charge. Officials have been instructed to register police complaints on such vehicles polluting the environment. The water agency is planning to procure sewage disposal lorries to serve merged areas and mitigate pollution.