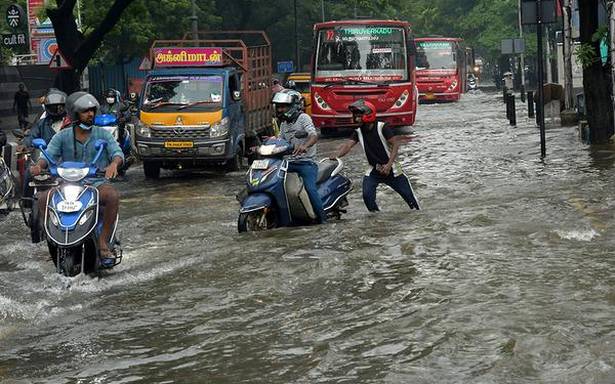 It plans to map water catchment areas and water flow patterns in its Third Master Plan.

The proposals for sites spread over 2.64 acres and 3,500 sq.ft. at Moondramkattalai, Sriperumbudur and Nemilicherry, Pallavaram, respectively were rejected as the sites lay in waterbodies. Similarly, a six-acre site at Nandambakkam and a 1.3 acre site at Thiruvanmiyur were rejected for conversion as they were part of the Adyar or on the seaward side.

CMDA Member-Secretary Anshul Mishra said, “We will ensure that such proposals are not permitted. A detailed policy will be drafted and hydrological studies will also be incorporated in the plans.”

Though the weather bulletin on November 6 had forecast moderate rain, heavy at times in Chennai, the Meteorological Department noted that its warning predicted heavy thunderstorms in its three-hour bulletins from 9 p.m. on November 6 and updated the State Government agencies.

S. Balachandran, Deputy Director-General of Meteorology, Chennai, said, “Forecast of extremely heavy rain at short intervals arising out of mesoscale phenomenon of smaller weather systems with spatial scale of only few km has limitations in the current meteorological technology.”

Meanwhile, the Water Resources Department has managed to avoid flash floods in the Adyar with better planning this time.

“Normally, we wait for the flow into the reservoir to make a decision. We discharge the same volume as the inflow. But, this time, we analysed IMD predictions, the flood forecast of the Central Water Commission and TNUIFSL’s real-time flood forecast warning system,” a senior official said.

Measured volume of surplus water was released not more than 2,000-3,000 cusecs (cubic feet per second) in both Chembarambakkam and Red Hills reservoirs, and the combined storage was maintained at 80% to accommodate a sudden inflow. The Adyar carried 12,000 cusecs as the southern suburbs upstream like Tambaram had severe rain. The river can safely carry up to 40,000 cusecs without spillover. “We still have issues with floodwater draining into the river near Dargas Road as the Adyar is narrow there. As the level in the river is higher than surrounding areas, some areas like Varadarajapuram are waterlogged,” the official said.

Experts who raised concerns over diversion channels noted that site conditions, capacity and gradient of waterways must be taken into account. Silt deposited in major waterways like the Buckingham Canal must be cleared up to the sill level.