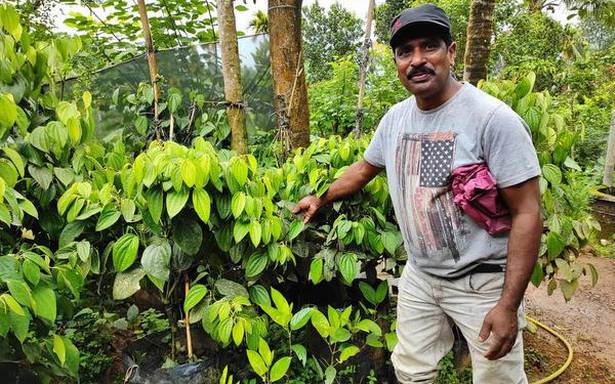 Muhammadali of Puthukkudy, a farmer at Muttil in Wayanad, is known as the magician of pepper vines among his friends following his huge success in managing grafted bush pepper vines in and around his homestead.

The progressive farmer is growing more than 300 grafted bush pepper vines belonging to six varieties on his pepper garden on 23 cents of land and gets an average yield of two to three quintals of black pepper every year.

Mr. Muhammadali turned to bush pepper cultivation a few years ago after his pepper vines were destroyed in a flood. He used to get more than five quintals of black pepper from 270 pepper vines.

In bush pepper farming, Colubrinum (Piper colubrina), locally called Kattu Thippaly, is used as the stock. A nursery is set up in the garden for raising Colubrinum alone and each of the stock is later grafted with pepper varieties such as Panniyoor 1, Karimunda, Thekken and Kombukkal.

Ease of management is another attraction as the farmer can have a look at each and every leaf of the plant that grows in a polythene bag. Another advantage is round-the-year harvest, if the bushes are managed properly, he says.

Mr. Muhammadali is a role model for every marginal farmer in the State as he is making an attractive income from a small piece of land, says Joseph John, scientist at M.S. Swaminathan Research Foundation.

As nearly 78% of farmers in the country are marginal farmers, the methods and techniques developed by Mr. Muhammadali can be replicated by every farmer, Mr. John says.