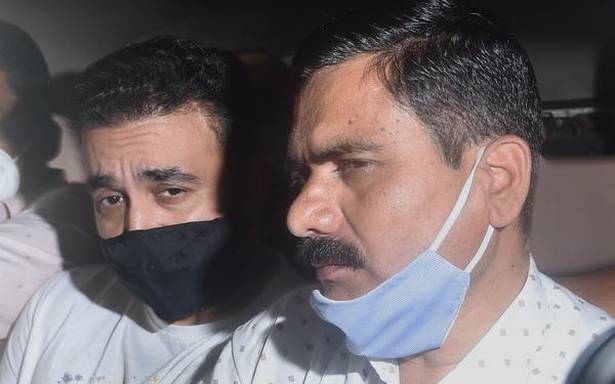 He was arrested on July 19 in connection with pornography racket busted in Feb. last

A Mumbai court on Friday extended the police custody of actor Shilpa Shetty’s husband and businessman Raj Kundra along with his business associate, Ryan Thorpe, till July 27, for allegedly producing and circulating pornography videos through social media.

The police suspect that money earned through pornographic work was used for online betting and he had financial transactions with Yes bank and United Bank of Africa. The police sought seven days of their custody to find out about the revenue channels.

Mr. Kundra was arrested by the Property Cell of the Mumbai Crime Branch on July 19 in connection with the pornography racket busted in February last.

On February 4 last, in a bungalow at Madh village Malad, some boys and girls were filming and recording nude and vulgar videos and uploading them on various online platforms. Police conducted a raid and some people were found involved. Actor Gahena Vashisht was allegedly one of them and investigation revealed that videos were going to be uploaded on a website and mobile app named HotShot.

He has been charged with 354 C (voyeurism), 292 (sale, etc. of obscene books,), 293 (sale, etc., of obscene objects to young person), 420 (cheating and dishonestly inducing delivery of property), of the Indian Penal Code along with relevant sections of the Information Technology Act and the Sexual Harassment of Women at Workplace Act.