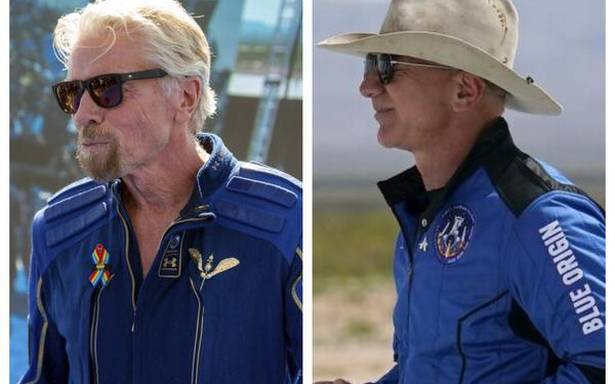 The story so far: Billionaires Jeff Bezos and Richard Branson made news this week for their privately funded flight trips to sub-orbital space. Mr. Branson was initially scheduled to make his trip a few months after Mr. Bezos, but advanced the date to beat Mr. Bezos to space. Interestingly, Mr. Bezos’s company Blue Origin took a dig at Mr. Branson’s feat, stating that Mr. Branson’s flight did not reach sufficient altitude to make the British billionaire’s trip qualify as a space flight. Elon Musk is another American billionaire who has taken keen interest in travel to space. His company SpaceX, apart from other expeditions to space, sent two NASA astronauts to the International Space Station just last year.

Why are billionaires racing to space?

Each of these billionaires claims to have been fascinated by the idea of space travel ever since their childhood. As businessmen, however, they can also see a tremendous opportunity to make money by exploiting resources in space. At the moment, it is unclear what exactly they plan to tap from space, as has been the case with any nascent industry. Space tourism is one goal that has been explicitly stated.

Virgin Atlantic, Richard Branson’s space company, plans to charge $250,000 for a seat on its sub-orbital space flight. There is even an ambitious plan to set up a human colony in various planets, as a backup plan to escape the earth in case of a catastrophe. Also, Mr. Bezos, Mr. Branson and Mr. Musk may very well be looking to leave their mark in history as the pioneers of the private space industry. This is probably why Mr. Branson rushed his trip to space, that is, to beat Mr. Bezos.

Lastly, it is not just these big businessmen who have shown interest in the space sector. There are several smaller private companies that are vying for their share of the largely unexploited space business. Altitude Angel, PlanetWatchers and AST SpaceMobile are a few of the notable ones. By some estimates, investment in commercial space ventures almost doubled in the last one year alone. Even public markets have been tapped into recently to fund space ventures. Notably, Seraphim Space Investment Trust, a publicly-traded fund which holds stocks in various space companies, is backed by Mr. Branson.

What do the sceptics say?

The chief criticism levelled against these billionaire-sponsored private space flights is that the money spent on them could be better spent on other more pressing needs. These critics, such as prominent U.S. Democrat politician Bernie Sanders, see privately funded space travel and exploration as vanity projects that do not add to the knowledge base or welfare of mankind.

Supporters of privately funded exploitation of space, however, argue that many nascent technologies such as cars and telephones were once seen as vanity goods too before they eventually became mass products. These are mostly economists who expect the price of space-related services to drop as more companies enter the space sector to compete and increase supply. They also argue that inventions such as airplanes were the product of privately funded efforts and that these efforts have benefited society immensely.

Further, some believe that these trips to space may be used by the billionaires as a marketing exercise to exude confidence in customers about the safety of travel into space. Meanwhile, there are others, such as billionaire investor Ray Dalio, for example, who are not opposed to the idea of privately funded exploitation of space per se, but who still believe that the money could be spent better on other endeavours. They point out that even most of earth remains unexplored and that returns on investing in exploring unexplored parts of the earth may be far higher than returns on space investments.

The future of the space sector will depend heavily on how governments frame their policies towards space. The sector remains heavily regulated by governments across the world, usually citing national security reasons.

India, for instance, partially opened up its space sector to private companies only last year. Space research in the West during the Cold War era was largely seen as a subset of military research, which was out of bounds for the private sector. It was also believed that space research and exploration were too expensive and risky for private companies to bear. In recent decades, however, the United States, China and other countries have begun to significantly deregulate and open up their space sector, which has led to the entry of many private companies. Further deregulation of the space sector is likely to bring in more private investments and innovation. This can cause space travel and other space-related services to become more accessible to common folks as well.

The setting up of human colonies on other planets will also bring into focus issues such as the demarcation of property rights. Many have already warned about the risk of a few billionaires colonising territory in space, but others believe that even such colonisation by a few does not pose any risk. Governments, in order to exert their own control over such territory, are also likely to try and regulate private companies trying to set up such colonies.