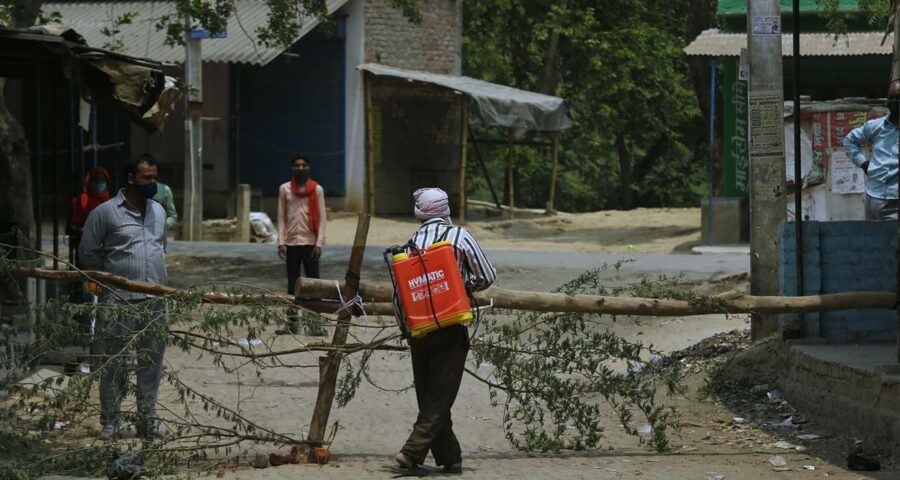 Rae Bareli is among the predominantly rural districts in India's most populous state that have been buffeted by the second Covid wave. AS VEHICLES grind to a halt before the makeshift wooden barrier on the tarred single-lane road, Avinash Prasad hitches up his mask and tells people to turn away. “There is Covid in the village. The government has made this a containment zone, 18 people have died in a month,” he says.

This is one of the entry points to Sultanpur Khera village in UP’s Rae Bareli district. And behind the barrier is Prasad’s home, where his family members are seated on a cot in the courtyard. “Nobody is stepping out. Dehshat hi dehshat hai (There is fear everywhere),” he says.

Nearby, Dinesh Singh, a bank employee, reads out from a list he has compiled of those who died here in the past month after displaying flu-like symptoms: 17 out of 18.

The Indian Express spoke to the families of 11 of them and confirmed the presence of symptoms, such as fever, cough, cold, headache and breathlessness, before death. “For days, we believed it was the usual sardi-khasi (cold and cough). Then, people started dying, and we panicked,” Singh says.

Of the 17, local residents say 15 were not tested for Covid, or taken to a hospital. And this is why, they say, official records show only two Covid deaths from the village of 3,000 in April. “The eighteenth death was of a young girl, who had a congenital heart condition and had no symptoms of Covid at all,” says Singh.

Among the 15 who died without being tested was Ram Samjivan Sahu, who ran a chaat stall. “For three days, all he had was a bad cold, and a fever. So we took him to a local doctor, who gave him some basic medicine. Then his breathing became heavy, and we began looking for oxygen. But he died very quickly (on April 27),” says Sahu’s son Ganesh.

Residents say the village has never seen 18 deaths in a month before. “In a village of our size, maybe one or two. There are many months when there are none. When someone dies, everyone knows because everyone comes together,” says Singh.

Rae Bareli is among the predominantly rural districts in India’s most populous state that have been buffeted by the second Covid wave.

Last year, during the first wave, the daily case count in the district peaked at 110 on October 2, and active cases at 670 on September 19. This year, the active caseload peaked at 4,166 on April 26, with 376 new cases and four deaths. Since then, the numbers have shown a dip.

On April 29, the district registered 331 new cases and three deaths, with 3,794 active cases. On May 9, the numbers dipped to 112 new cases and three deaths with an active caseload of 1,558. But in the village, where the lanes, bazaar ground, temple and handpumps all lie eerily empty, there is a growing chorus that the numbers are being undercounted.

Singh, the bank employee, pulls out another list — of 14 people who have been isolated at home after testing positive. “In our village, it is hard to be completely isolated. So I go to each home, and make sure they are staying inside. Or I call them to make sure they are happy and give them support,” says Singh, who himself tested positive in February and recovered.

Avdesh Gupta, 48, who ran a kirana store in the village, was among the two dead who had tested positive last month. “He had the same symptoms, cold, cough and fever. Three days later, he was taken to the district hospital where he tested positive and died,” says Gupta’s new Manoj Kumar Gupta, who has a cloth mask, a surgical mask and a white gamcha wrapped around his face. “The others who died were not tested,” he says.

As the voices from Sultanpur Khera grew louder, the district administration swung into action on May 2, cordoning off the village and holding a mass testing drive. Says Anshika Dikshit, Sub-Divisional Magistrate (SDM), Rae Bareli: “The whole village has been made a containment zone and barricading has been done. Regular sanitisation has been taking place for the last one week. On May 2, we did about 150 tests, and eight people were positive.”

Virendra Singh, Chief Medical Officer (CMO), says that in official records, there were only two deaths from Covid in Sultanpur Khera last month. “We had received some information about deaths and cases in Sultanpur Khera in April. In those, there were only two Covid tests. The others were old, and may have had other chronic illness, which caused the deaths,” he says.

However, residents say that a week after the tests were conducted, there was another death — of a recovered Covid patient, Bablu Savita, who ran a shop that sold masks and cloth products. “He had Covid in March. Fourteen days later, he tested negative,” says his nephew, Prashant Kumar. “He reopened his shop but continued to complain of tiredness and splitting headaches that came and went. But there were no breathing problems or fever. We thought it had passed.”

On May 9, Kumar says he was with his uncle. “He woke up as usual at 7 am, but within two hours had a splitting headache and complained of uneasiness. Then, he fell unconscious. I tried calling ambulances but couldn’t get through. Nobody comes here to the village anyway. Before we had any chance to think, he was dead,” says Kumar.

The CMO says another round of 400-450 tests were conducted in the village the next day. “I don’t see Sultanpur Khera as an outbreak given that only two cases had positive reports. But definitely, we are going towards community spread. We are sending teams to all revenue villages to check,” he says.

Since the last round of testing, Dinesh Singh has been scanning the UP’s government’s website for test results to check if there are any positive cases from the village. “I have spotted nine more from the latest round of testing, from the ages of 12 to 59. Two of the nine are above 50, and the rest are under 40. No one is telling us if everyone else is negative, and there are no individual reports,” he says.