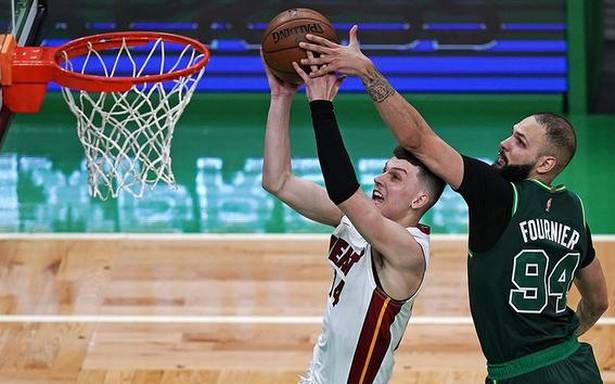 Miami Heat clinched a spot in the playoffs for the fourth time in the past six seasons by beating the host Boston Celtics 129-121 on Tuesday night. Tyler Herro led the Heat with 24 points.

Miami won in Boston for the second consecutive game, all but relegating the Celtics to the NBA’s play-in tournament. Miami has a three-game lead and holdst he head-to-head tiebreaker on the Celtics with each team having three regular-season contests to play.

The Pacers clinched a berth in the Eastern Conference play-in tournament with their second consecutive victory coupled with Chicago Bulls’ loss to Brooklyn Nets.

Terence Davis came off the bench to score 27 points, leading Sacramento to a home win over Oklahoma City.

Andrew Wiggins, Juan Toscano-Anderson and Jordan Poole buried consecutive 3-pointers in the final 2:58, capping a Golden State comeback that resulted in a 122-116 victory over visiting Phoenix.

Warriots remain a half-game ahead of Memphis in their duel for the eighth position in the West’s play-in tournament.