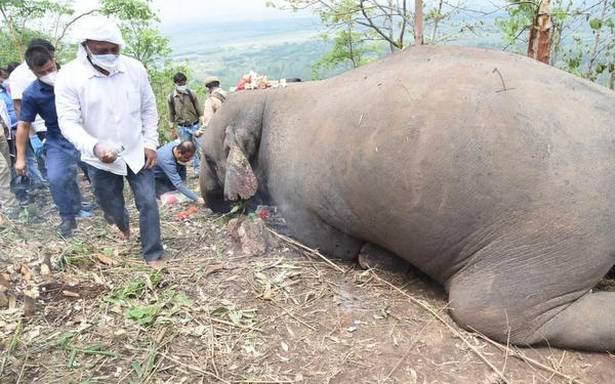 Assam’s Minister for Environment and Forest, Parimal Suklabaidya, has ordered an enquiry into the death of 18 elephants on a hillock in central Assam’s Nagaon district Wednesday night.

A thunderbolt is said to have killed the herd of elephants on Bamuni Hill within the Kundali Proposed Reserve Forest under the Kathiatoli forest range.

The probe was ordered after Mr. Suklabaidya and a team of senior officials, veterinarians and wildlife specialists inspected the site of the incident on Friday morning.

The seven-member enquiry committee headed by the Deputy Conservator of Forest, K.K. Deori has been asked to submit a detailed investigation report within 15 days.

“Preliminary investigation reveals the elephants probably died due to lightning as there were no visible signs of struggle before they died. But the exact cause for their tragic death will be known after the post mortem and inquiry report,” Mr. Suklabaidya.

State Forest officials have, however, come under attack for publicising the cause of death without the supporting facts.

“It is possible that lightning killed the elephants but it is very unprofessional to attribute it to a natural cause without facts. A disease or poisoning by criminals can also result in so many elephants dying at the same spot while resting,” wildlife specialist Firoze Ahmed said.

Locals said the hillock where the elephants died is close to Mikir Bamuni Grant where Adivasi and Karbi tribal people have been protesting the takeover of 276 bighas of their farmland for a 15MW solar plant allegedly through doctored documents.

“Assam forest officials were evasive when we went to the solar plant site for a fact-finding report. The death of the elephants indicates that the land where the private company is setting up the solar power project is part of an active elephant corridor, hence ecologically sensitive,” Leo Saldanha of the Delhi Solidarity Group told The Hindu.

He said the fact-finding team had spotted elephant footprints in the vicinity of the solar power plant site and there have been cases of man-animal conflicts in the area.